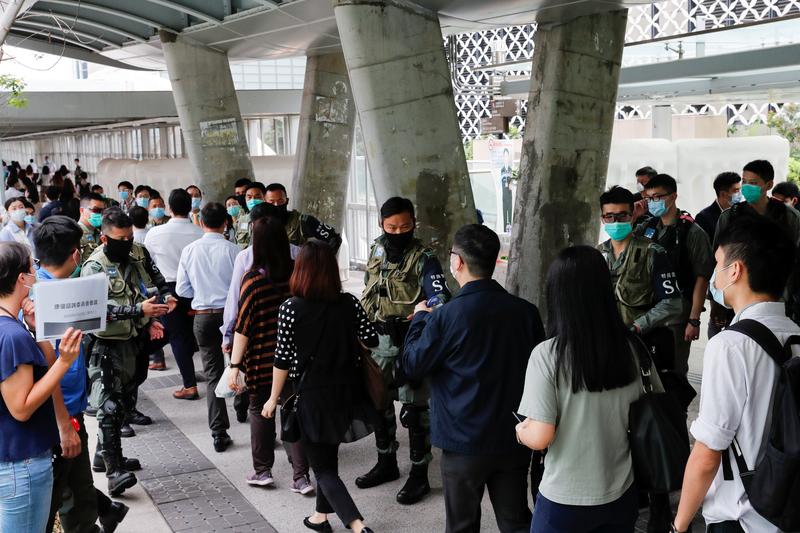 HONG KONG (Reuters) – Hong Kong deployed riot police around the Legislative Council on Wednesday as activists called for protests against a bill to criminalise disrespect of the Chinese anthem, amid soaring tensions over perceived threats to the city’s freedoms.

Protests have returned to the streets of the Chinese-ruled city after Beijing proposed national security laws last week that sparked global fears that China is intent on ending the freedoms that have made the city a financial powerhouse.

Hundreds of riot police took up positions and authorities erected a two-metre (6 feet) wall made of plastic barriers filled with water around the Legislative Council, extending across a park up to Victoria Harbour.

In other parts of the city, protesters used bins and debris to block roads, while activists issued calls online for demonstrations in various locations later in the day.

“Although you’re afraid inside your heart, you need to speak out,” said Chang, 29, a clerk and protester dressed in black with a helmet respirator and goggles in her backpack.

Protesters in the Causeway Bay mall chanted “Liberate Hong Kong! Revolution of our times” and “Hong Kong independence, the only way out”, but dispersed as lookouts shouted a warning to “go shopping!” at the sight of police vans outside.

Another protester was seen with a placard reading “one country, two systems is a lie”, referring to the political system put in place at the handover that was meant to guarantee Hong Kong’s freedoms until 2047.

“I’m scared … if you don’t come out today, you’ll never be able to come out. This is legislation that directly affects us,” said Ryan Tsang, hotel manager.

It could see Chinese intelligence agencies set up bases in the city that was supposed to have a high degree of autonomy under the terms of its 1997 handover to China by former colonial power Britain.

The move triggered the first big street unrest in Hong Kong in months on Sunday, with police firing tear gas and water cannon to disperse protesters, evoking memories of violent anti-government protests that paralysed parts of the city last year.

Chinese authorities and the Beijing-backed government in Hong Kong say there is no threat to the city’s high degree of autonomy and the laws will be tightly focused.

Hong Kong media reported on Wednesday that Beijing had expanded the scope of the draft security legislation to include organisations as well as individuals.

The law was being revised to cover not just behaviour or acts that endanger national security, but also activities, local broadcaster RTHK and the South China Morning Post reported.

U.S. President Donald Trump on Tuesday said the United States this week would announce a strong response to the planned security legislation for Hong Kong.

Asian shares slipped on Wednesday over rising tensions between the United States and China. Hong Kong shares led declines with the Hang Seng .HSI falling 0.46%, though it kept a bit of distance from a two-month low touched on Monday. [MKTS/GLOB]

Protesters and pro-democracy politicians say Hong Kong’s National Anthem Bill, which aims to govern the use and playing of the Chinese national anthem, represents another sign of what they see as accelerating interference from Beijing.

The bill carries penalties of up to three years jail and/or fines of up to HK$50,000 ($6,450) for those who insult the anthem. It also orders that primary and secondary school students in Hong Kong be taught to sing the “March of the Volunteers”, along with its history and etiquette.

The anthem bill is set for a second reading on Wednesday and is expected to be turned into law next month.