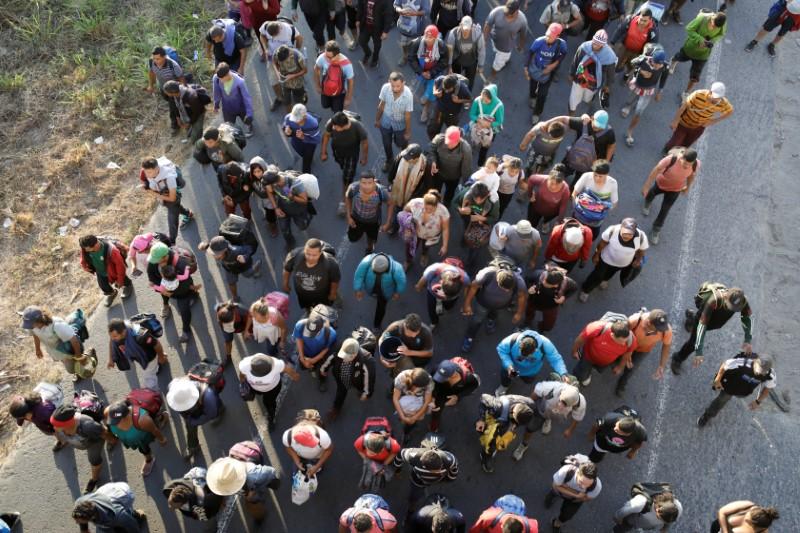 WASHINGTON (Reuters) – U.S. Supreme Court justices on Tuesday signaled skepticism toward a federal law that made it a felony to encourage illegal immigrants to come or stay in the United States as they heard a bid by President Donald Trump’s administration to revive the measure after it was struck down by a lower court.

Migrants, mainly from Central America and marching in a caravan, walk on a road on the outskirts of Ciudad Hidalgo, Chiapas, Mexico January 23, 2020. REUTERS/Andres Martinez Casares

The nine justices heard arguments in the administration’s appeal after the San Francisco-based 9th U.S. Circuit Court of Appeals invalidated the law as a violation of the U.S. Constitution’s First Amendment guarantee of free speech.

Conservative and liberal justices alike expressed concern that the decades-old law may be too broad, repeatedly pressing the administration about what kind of speech could be criminalized.

Chief Justice John Roberts, a conservative, asked whether it would be illegal for a grandmother to tell a grandchild who was in the United States unlawfully, “I encourage you to stay.” Other justices wondered about the work of lawyers or charities and whether their speech could be impaired.

The case involves Evelyn Sineneng-Smith, a U.S. citizen who ran an immigration consultancy in San Jose, California, and was convicted of violating the law.

It is one of a number of immigration-related appeals the Supreme Court is handling during its term that ends in June. The justices in November heard Trump’s bid to rescind a program that protects from deportation hundreds of thousands of young people known as “Dreamers” who were brought to the United States illegally as children.

Trump has made restricting both legal and illegal immigration a centerpiece of his presidency and his re-election bid this year.

Sineneng-Smith was convicted in 2013 of violating the law, which bars inducing or encouraging an illegal immigrant to “come to, enter or reside” in the United States, including for financial gain. She also was convicted of mail fraud, and was sentenced to 18 months in prison and three years of supervised release.

A federal grand jury in 2010 charged Sineneng-Smith, accusing her of making money by duping illegal migrants into paying her to file frivolous visa applications while remaining in the country indefinitely. Her business primarily served Filipinos who worked as home healthcare providers.

The 9th Circuit in 2018 ruled that the law must be struck down because it is overly broad, prompting the Trump administration’s appeal to the Supreme Court.

The administration said the law is not meant to catch protected speech, but rather to stop people who would facilitate or solicit illegal immigration and enrich themselves by doing so.

The law threatens anything that could inspire or embolden illegal immigrants, including the thousands of messages of support for Dreamers that flooded the internet after the justices heard arguments in that case last November, the Electronic Frontier Foundation, a civil rights group, said in a court filing.

Reporting by Andrew Chung; Editing by Will Dunham