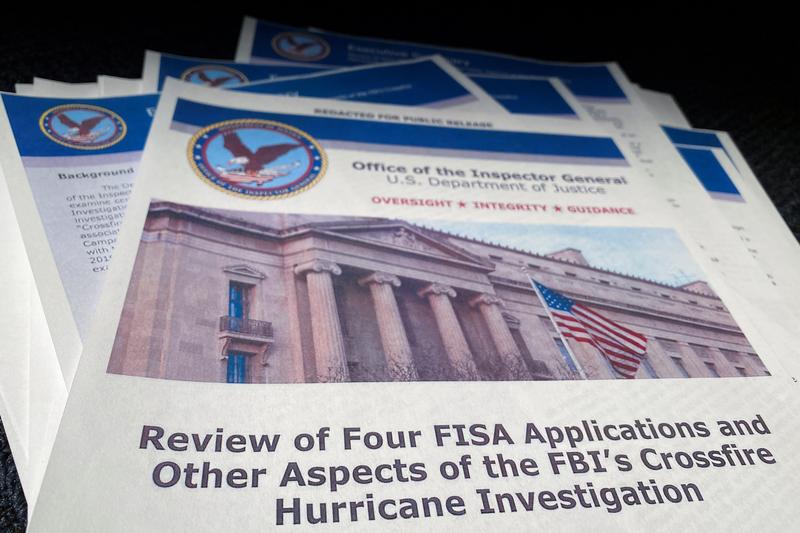 WASHINGTON (Reuters) – The U.S. Justice Department’s internal watchdog said it found numerous errors but no evidence of political bias by the FBI when it opened an investigation into contacts between Donald Trump’s presidential campaign and Russia in 2016.

The U.S. Justice Department’s Inspector General Michael Horowitz’s report entitled “Review of Four FISA Applications and Other Aspects of the FBI’s Crossfire Hurrican Investigation” about the origins of the FBI’s investigation into contacts between Donald Trump’s 2016 presidential campaign and Russia is seen after its release by the Justice Department in Washington, U.S. December 9, 2019. REUTERS/Jim Bourg

The report by Inspector General Michael Horowitz was likely to give ammunition to both Republican Trump’s supporters and his Democratic critics in the debate about the legitimacy of an investigation that clouded the first two years of his presidency.

It will not be the last word on the subject.

U.S. Attorney John Durham, who is running a separate criminal investigation on the origins of the Russia probe, said in a prepared statement that “we do not agree with some of the report’s conclusions.”

Attorney General William Barr, who ordered the Durham investigation, said the report showed that the FBI “launched an intrusive investigation of a U.S. presidential campaign on the thinnest of suspicions.”

Horowitz found that the FBI had a legal “authorized purpose” to ask for court approval to begin surveillance of Carter Page, a Trump campaign adviser.

But Horowitz also found a total of 17 “basic and fundamental” errors and omissions in the original application and all subsequent renewals to the Foreign Intelligence Surveillance Court (FISA). Those errors made the case appear stronger than it was, Horowitz said.

In particular, the report singled out an FBI lawyer who altered an email contained in a renewal of the application which claimed that Page was “not a source” to another U.S. government agency.

In truth, Page served as a “operational contact” to another agency, which was not identified in the report.

That lawyer was previously identified by Republican Representative Mark Meadows as Kevin Clinesmith, who is no longer with the agency. Clinesmith, former FBI attorney Lisa Page and former special agent Peter Strzok were found last year to have exchanged text messages critical of Trump.

Clinesmith did not immediately respond to a request for comment.

The FBI investigation, opened in the summer of 2016 ahead of the November election pitting Trump against Democratic candidate Hillary Clinton, was taken over in May 2017 by former FBI chief Robert Mueller after Trump fired James Comey as the agency’s director.

Trump called the investigation, known within the FBI as Crossfire Hurricane, a witch hunt and assailed FBI leaders and career staffers who worked on it.

Democrats have accused Trump of seeking to discredit a legitimate investigation that detailed extensive interactions between his campaign and Russia.

“The FBI had an authorized purpose when it opened Crossfire Hurricane to obtain information about, or protect against, a national security or federal crime, even though the investigation also had the potential to impact constitutionally protected activity,” Horowitz’s report said.

FBI Director Christopher Wray said he had ordered 40 steps, such as changes to its warrant applications and methods for dealing with informants, to fix problems highlighted in the report. He said the agency would review the conduct of employees mentioned in the report.

Horowitz said his office on Monday began a new review to further scrutinize the FBI’s compliance with its own fact-checking policies used to get applications to surveil U.S. persons in counterterrorism investigations, as well as counterintelligence probes.

Crossfire Hurricane opened on July 31, 2016, after the FBI received a tip from a foreign ally that Trump adviser George Papadopoulos suggested he had gotten offers of help from the Kremlin.

When it asked for court permission to open a wiretap on Page, Horowitz found that the FBI relied heavily on research assembled by former British intelligence officer Christopher Steele.

While the FBI had reason to believe that Steele was reliable as it had worked with him before, the agency did not reassess his information when it sought to renew its warrants, the report said, and did not press him about who was funding his work.

Steele assembled his dossier for an opposition-research firm that was funded by the Democratic Party. Trump’s allies say the FBI should have disclosed that fact in its warrant application.