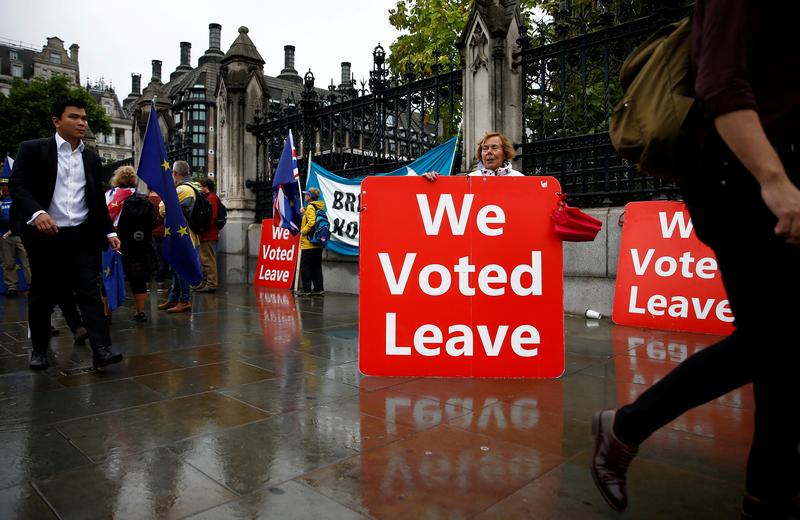 LONDON (Reuters) – The Brexit blame game began on Tuesday when a source in British Prime Minister Boris Johnson’s office blamed German Chancellor Angela Merkel for scuppering any chance of an exit deal with unacceptable demands about the future of Northern Ireland.

With just 23 days before the United Kingdom is due to leave the bloc, the future of Brexit remains deeply uncertain and both London and Brussels are positioning themselves to avoid blame for a delay or a disorderly no-deal Brexit.

EU leaders reacted coolly to Johnson’s last-ditch proposals to bridge the impasse. Merkel and Johnson spoke on Tuesday morning and she made clear that a deal was “overwhelmingly unlikely”, a Downing Street source said.

Merkel said that for a deal, Northern Ireland would have to stay in the EU’s customs union and full alignment with the EU forever, the source said. A spokesman for the German chancellor declined to comment on the phone call.

“If this represents a new established position then it means a deal is essentially impossible not just now but ever,” the Downing Street source said.

“It also made clear that they are willing to torpedo the Good Friday Agreement.”

The 1998 agreement bought peace to Northern Ireland after three years of sectarian and political violence which killed about 3,600 people. The EU has previously stated any Brexit deal must safeguard the accord.

Such abrupt remarks from London indicate the Brexit blame game has begun in earnest, and that now both London and European capitals are preparing for an acrimonious and potentially chaotic Brexit which neither side wants to be held responsible.

“This is yet another cynical attempt by Number 10 to sabotage the negotiations,” said Labour’s Brexit spokesman Keir Starmer, adding that the British parliament needed to unite to stop him.

“Boris Johnson will never take responsibility for his own failure to put forward a credible deal. His strategy from day one has been for a no-deal Brexit.”

A separate Downing Street source told Reuters that unless the European Union compromises and does a Brexit deal shortly, then the United Kingdom will leave without a deal.

“If the EU doesn’t do a deal shortly, then we leave without a deal,” the source said. “We are leaving the European Union.”

Johnson has consistently said the United Kingdom will leave the EU on Oct. 31 with or without a deal, though a law passed by parliament demands he write a letter to the EU asking for a delay if he cannot strike an exit deal by Oct. 19.

He has said he would abide by the law but Britain would leave the EU by the end of the month, without explaining that contradiction. He has also repeatedly demanded an election but parliament has refused to grant one.

The Spectator magazine quoted an unidentified source in Downing Street as saying that Britain would take an aggressive stance toward the EU if Brexit talks break down, possibly even by withholding security cooperation.

“The negotiations will probably end this week,” the Spectator magazine quoted an unidentified source in Downing Street as saying. The source added that those who hoped that Merkel would help London were “deluded”.

“This government will not negotiate further so any delay would be totally pointless,” the source was quoted as saying. “We’ll either leave with no deal on 31 October or there will be an election and then we will leave with no deal.”