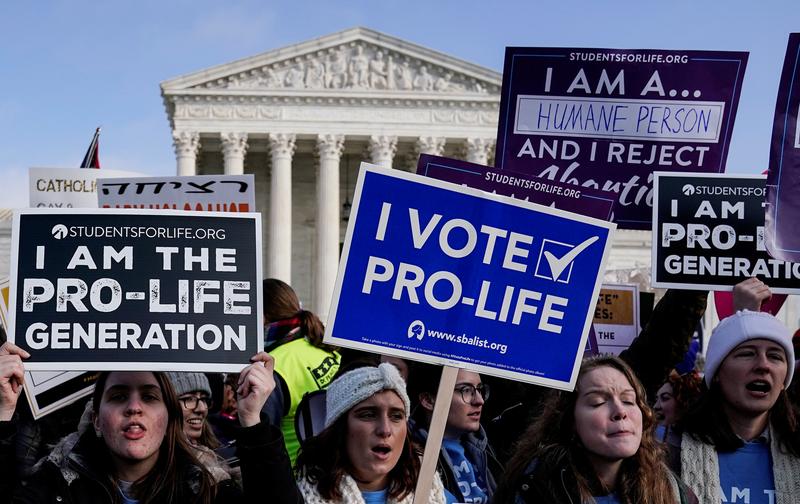 WASHINGTON (Reuters) – With new abortion cases on a fast track to the U.S. Supreme Court, the nine justices will get an opportunity within weeks to take up legal fights over Republican-backed laws that could lead to rulings curbing a woman’s ability to obtain the procedure.

The big question is not so much whether the court, with its 5-4 conservative majority that includes two justices appointed by President Donald Trump, will take up an appeal that could permit new restrictions on abortion rights, but when it will do so, according to legal experts.

Anti-abortion advocates are hoping the court will chip away at the 1973 Roe v. Wade ruling that legalized abortion nationwide and recognized a woman’s constitutional right to the procedure – or even overturn the landmark decision.

Appeals already are pending in cases challenging the legality of Republican-backed abortion restrictions in Indiana and Louisiana, with legal fights also brewing over laws in other states including an Alabama measure that would effectively ban all abortions.

(For a graphic on abortion laws in United States, see here)

The court is scheduled to discuss the Louisiana and Indiana appeals in private on Oct. 1 and announce within days of that meeting whether it will hear the cases, which could lead to rulings by next June.

Whether the court proceeds quickly on abortion or takes a slower approach could depend upon conservative Chief Justice John Roberts, who has emerged as the court’s ideological center amid its rightward shift with Trump’s appointment of Neil Gorsuch in 2017 and Brett Kavanaugh in 2018.

“I have to believe they will take one sooner rather than later. It’s clear notwithstanding all the decades since Roe v. Wade that there is intense disagreement among Americans,” said John Bursch, a lawyer with conservative Christian legal group Alliance Defending Freedom, which opposes abortion.

“Anytime you have that much turmoil in the political process it’s going to create conflicts the court must address,” Bursch added.

Abortion opponents are hoping the 2018 retirement of Justice Anthony Kennedy, a conservative who was pivotal in defending abortion rights, has created an opening for more restrictions to secure Supreme Court approval. Kennedy as recently as 2016 cast the decisive vote in blocking strict regulations on abortion clinics and doctors in Texas.

Trump, who vowed during the 2016 presidential campaign to appoint justices who would overturn Roe v. Wade, appointed Kavanaugh to replace Kennedy.

“There should be no reason for the Supreme Court to revisit Roe, but we know this is exactly what some of the states are trying to do and what President Trump was looking for in his Supreme Court nominees,” said Jennifer Dalven, a lawyer with the American Civil Liberties Union, which is involved in litigation challenging various abortion restrictions.

Broadly speaking, Republican-controlled states have enacted two types of abortion laws: measures that impose burdensome regulations on abortion providers and those that directly seek to ban abortions during the early stages of pregnancy.

The latter laws in particular directly challenge Roe v. Wade and a subsequent 1992 ruling that upheld it. Those two rulings made clear that women have a constitutional right to obtain an abortion at least up until the point the fetus is viable outside the womb, usually around 24 weeks of gestation or soon after.

The Louisiana law imposes restrictions that abortion providers have said would force them to close. It requires that doctors who perform abortions have a difficult-to-obtain arrangement called “admitting privileges” at a hospital within 30 miles (48 km) of the clinic. The legal issue is similar to the 2016 case in which the court struck down a Texas admitting privileges requirement.

In February, the court on a 5-4 vote prevented the Louisiana law from taking effect while litigation continued, with Roberts joining the court’s four liberals. Roberts dissented in the Texas case but his vote in February indicates he may have some doubts about the court reversing course on a precedent it set only three years ago.

The Indiana case involves the state’s attempt to revive a Republican-backed law that requires women to undergo an ultrasound at least 18 hours before undergoing an abortion, a requirement critics call medically unnecessary.

Legal challenges to laws recently enacted in conservative states that directly challenge the Roe precedent by banning abortion outright or in early stages of pregnancy may not reach the court in time for it to act during its coming term.

Other cases that could reach the court sooner include fights over abortion restrictions in Mississippi, Kentucky and Arkansas that are pending in appeals courts.

Since Kavanaugh joined the Supreme Court last October, it has sent mixed signals on abortion. The court in June declined to hear a bid by Alabama to revive another Republican-backed law that would have effectively banned abortions after 15 weeks of pregnancy.

In May, it refused to consider reinstating Indiana’s ban on abortions performed because of fetal disability or the sex or race of the fetus while upholding the state’s requirement that fetal remains be buried or cremated after an abortion.

Julie Rikelman, a lawyer at the Center for Reproductive Rights, which supports abortion rights, said the Supreme Court is likely to take up a case on one of the restrictive laws rather than a measure that directly bans abortion, meaning it could avoid having to decide for now on overturning Roe v. Wade.

“What’s important for people to know,” Rikelman said, “is that even while Roe is the law, there is a great deal of harm that can be done.”