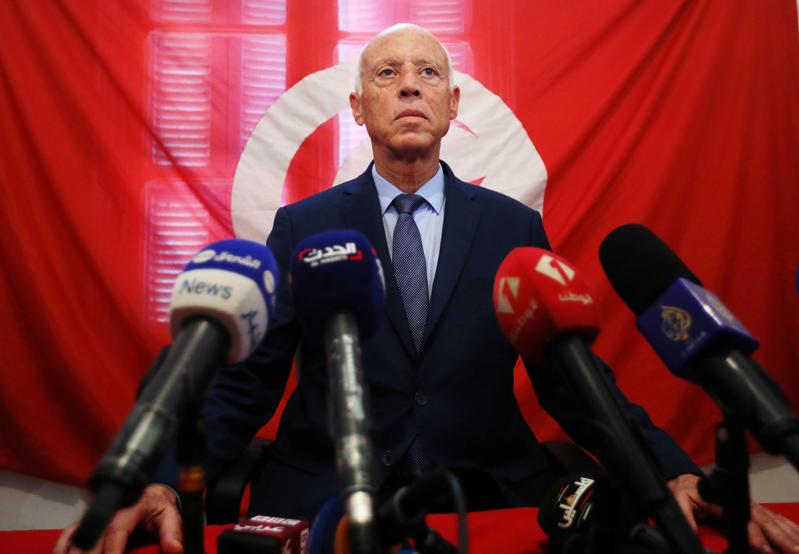 Presidential candidate Kais Saied speaks as he attends a news conference after the announcement of the results in the first round of Tunisia’s presidential election in Tunis, Tunisia September 17, 2019. REUTERS/Muhammad Hamed

Saied and media mogul Karoui won the most votes in Sunday’s presidential election, beating a number of veteran politicians.

The result was a sharp rejection of the forces that have dominated since the 2011 revolution but failed to address economic problems including high unemployment and inflation.

The field of 26 candidates included the prime minister, two former premiers, a former president and the defense minister.

Ennahda, which was shocked by its defeat, will now throw its weight behind Saied .

“The party has decided to support candidate Kais Saied because he is close to the spirit of the revolution and with clean hands,” said Mohamed Ben Salem, a senior Ennahda official.

None of the defeated candidates have yet endorsed Karoui.

Little-known before the election, Saied is a professor of constitutional law who ran a modest campaign with next to no publicity or funding, espousing conservative social views while pushing for a return to the principles of the 2011 uprising.

The second round of voting is expected next month after some candidates in the election appealed results.

Karoui, a well-known but controversial figure, is the owner of a major television news channel and founder of a large charity that focuses on the plight of Tunisia’s poor.

He was detained weeks before the election over a tax evasion and money laundering case brought three years ago by an independent transparency watchdog.

He denies all wrongdoing and his supporters attribute his arrest to political manipulation. He was unable to take part in televised debates before the vote and electoral monitors have voiced concern that voters have been deprived of a chance to hear him campaign.

A Karoui victory in the second round could raise difficult legal and constitutional questions given his status in detention in a case for which no verdict has yet been delivered.