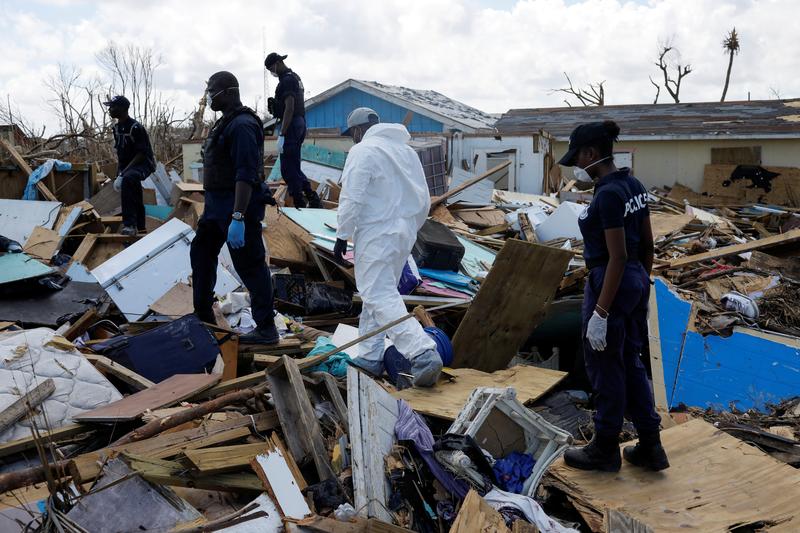 NASSAU, Bahamas (Reuters) – For some Bahamians who escaped death but lost their homes in Hurricane Dorian’s hellish rampage over the islands of Freeport and Great Abaco, life in the tent shelters erected this week seems like purgatory.

“We feel like we’re caged right now,” said Dana Lafrance, a 35-year-old mother of five, who is one of hundreds of people living in a massive tent set up to extend the capacity of a gymnasium housing storm evacuees in central Nassau, the capital of the former British colony.

As evacuees from the devastated islands continue to flow in, the Bahamas Gaming Operators Association said on Tuesday it had built more than 15,000 square feet (1,394 square meters) of air-conditioned, tent housing for more than 800 people. Some 295 people were staying in those tents on Wednesday, Bahamian officials said.

The two centers, one to the north of the town the other to the south, will provide temporary housing to people who wish to rebuild their homes on the island, he said. Officials estimated that 90% of the homes and buildings in Marsh Harbour were damaged or destroyed by Dorian’s top sustained winds of 185 miles (298 km) per hour.

At least 50 people died in the storm, according to Bahamian authorities.

Officials have blocked journalists from entering the temporary housing facilities, but people staying in them described the conditions, saying hundreds of evacuees are sleeping on air beds and have been provided meals, clothing and basic hygiene necessities as they start rebuilding their lives.

In total, 1,357 people are staying at the Kendal G.L. Isaacs National Gymnasium shelter and its three attached tents in Nassau, while several hundred more are housed in shelters across other parts of New Providence island, according to the Bahamas’ National Emergency Management Agency. It is unclear how long they will be needed.

But Lafrance, who worked as a housekeeper at a resort on Abaco that has closed since Dorian, does not expect to be able to move out anytime soon.

“Our whole house was brought down, there’s nothing,” she said. “But I know I can’t be here for no three months, I’m out of a job, they’re saying I can’t get unemployment, I need to work.”

Some 15,000 people are still in need of shelter or food, according to the Caribbean Disaster Emergency Management Agency. About 5,000 have been evacuated from the hardest-hit islands, which include Abaco, and another 6,000 to 7,000 remain there, according to a report shared by the U.N. World Food Programme on Wednesday.

“As the need arise, we will open other shelters,” Carl Smith, spokesman for the Bahamian National Emergency Management Agency told reporters on Tuesday.

Finding a life that can compare to the one many Bahamians had on Abaco might be a challenge. President Donald Trump has rebuffed the idea of welcoming many Bahamians to the United States, even as a bipartisan group of lawmakers including U.S. Senators Marco Rubio and Rick Scott of Florida called on the White House to temporarily relax visa requirements.

Many of the evacuees said Nassau is a far different place from Abaco, which lacks any of the capital’s hustle and bustle.

Sitha Silene, 34, who lost her home and several relatives in the Pigeon Peas shantytown of Marsh Harbour, described difficult conditions inside the tents, where she said hundreds of people were piled together, sleeping on air beds.

A psychologist had offered her medication, Silene said, but she rejected it.”I know they’re gone, I saw them dead and I know there’s nothing I can do about it,” she said. “All I want to know is if I can bury my mom and my brother, that’s the only thing I had.”

Who needs an Oscar? I’m popular in U.S. now, jokes Ukrainian leader
‘Parasite’ director Bong Joon-ho gets hero’s welcome in South Korea
Treat us like something between a telco and a newspaper, says Facebook’s Zuckerberg
Bolton says he hopes book is not ‘suppressed’ by White House
Johnson’s meeting with Trump postponed until June – the Sun