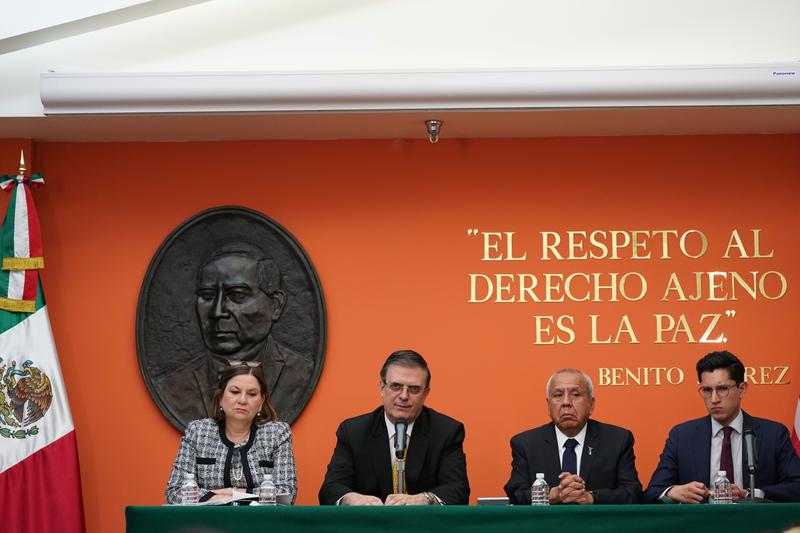 WASHINGTON (Reuters) – Mexican Foreign Minister Marcelo Ebrard said after a White House meeting on Tuesday that there has been a “significant decrease” in U.S.-bound immigration through Mexico, especially from Central America, and he expects the trend to continue.

Ebrard met with U.S. Vice President Mike Pence, and had a briefer exchange with President Donald Trump, to review progress in efforts to curb a surge in Central American migrants.

Pence acknowledged Mexico’s efforts. He said U.S. officials would work with Mexico to expand implementation of the Migrant Protection Protocols to speed up processing of asylum claims, according to a White House statement.

Mexico’s strategy of putting more than 25,000 National Guard militarized police along its borders and stepping up raids on people traffickers has been a success, Ebrard told a news conference.

“What Mexico has done is working,” said Ebrard, admitting that border crossings were still up from averages in September, “but the tendency is irreversible … It is something that we think will be permanent.”

Following threats by Trump to impose tariffs on all its goods, Mexico on June 7 pledged to take a series of steps to contain migrants, and the two governments agreed to review that effort after 90 days.

Ebrard said tariffs were not discussed. “It was not the purpose of the meeting. I would say Mexico in this moment is far from the tariffs, far from that possibility,” he said.

Mexico brought up the illicit flows of arms from the United States that Mexican authorities want to freeze, according to Ebrard, who said earlier on Twitter that would be Mexico’s priority at the meeting.

Successive Mexican governments have argued that illicit arms sales and gun-running from the United States into Mexico have fueled turf wars between drug gangs and clashes with security forces, exacerbating social problems and adding to migratory pressures.

More than 200,000 people have been killed in gang-fueled violence, and over 40,000 have disappeared since former President Felipe Calderon sent in the armed forces to tackle Mexico’s powerful drug cartels at the end of 2006.

President Andres Manuel Lopez Obrador, a leftist who took office in December, has vowed to end the lawlessness, but 2019 is on track to be Mexico’s most violent year on record.

This month, Trump and U.S. officials have praised Mexico and Central American countries for helping cut U.S. border arrests by nearly 60% from earlier this year. But the issue remains fraught in the run-up to the 2020 U.S. presidential election.

Trump campaigned for office in 2015-16 pledging to halt the flow of illegal immigrants and drugs from Mexico. The Mexican government has persistently argued that disputes over U.S.-Mexico border security are a shared responsibility.