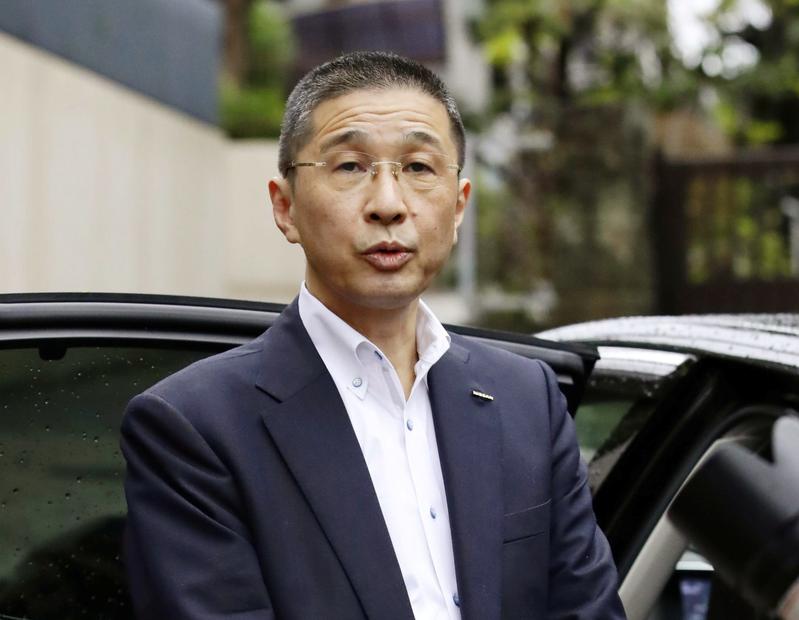 TOKYO/PARIS (Reuters) – Nissan Motor Co’s (7201.T) nominations committee will discuss potential successors for Hiroto Saikawa at a meeting on Monday, a source said, as pressure deepened on the embattled chief executive after he admitted to improper compensation.

Nissan CEO Hiroto Saikawa speaks to media before the company’s board members meeting in front of his residence in Tokyo, Japan September 9, 2019, in this photo taken by Kyodo. Mandatory credit Kyodo/via REUTERS

While Saikawa has told some executives of his intention to step down, the timing of such a move would be discussed by the committee, said the person, who declined to be identified because the information is not public. Both the committee and Nissan’s board were due to meet on Monday.

Saikawa admitted last week to being improperly overpaid and violating internal procedures. That admission, which followed an internal investigation, has pitched Nissan into fresh crisis and appears to have accelerated the search for a replacement.

His successor will inherit a company that has been battered by the arrest and subsequent ouster of former chairman Carlos Ghosn last year. Ties with top shareholder Renault SA (RENA.PA) have been deeply strained, casting doubt on the future of the Franco-Japanese automaking alliance.

“The nominating committee will also meet today and discuss the selection of a successor and the timing of the resignation,” the person said. “Saikawa isn’t at all clinging to his president’s chair. He never has been,” the person said.

The committee, established in June to find a successor, is made up of six company outsiders, including Renault Chairman Jean-Dominique Senard. It has drawn up a list containing more than 10 possible candidates, an alliance source told Reuters.

Those on the list include Jun Seki, tasked with Nissan’s performance recovery, Chief Competitive Officer Yasuhiro Yamauchi, and Makoto Uchida, chairman of Nissan’s management committee in China, said the alliance source, who also spoke on condition of anonymity.

Nissan declined to comment on Saikawa’s intention to resign, and did not respond to a request for comment on Monday’s meeting.

The chief executive earlier told reporters that he wanted to “pass the baton” to the next generation as soon as possible, the Nikkei newspaper and other media outlets reported. He has previously made similar comments when asked about his future at the automaker.

Pressure has mounted on Saikawa given the company’s poor performance and strained ties with Renault. Profit has tumbled to an 11-year low and prompted hefty job cuts.

The search and vetting process would likely take about six months as the committee considered both Japanese and non-Japanese candidates for the role, a third person with knowledge of the issue previously told Reuters.

Seki, who has been charged with leading the recovery, has been seen as a frontrunner for CEO. Prior to his latest promotion in June, the 58-year-old oversaw Nissan’s expansion in China, now the automaker’s top market. He joined the company in 1986.

For investors, a key question will be how Saikawa’s successor steers the alliance with Renault.

Yamauchi, the chief competitive officer, is widely seen as a bridge between the two firms and is also known to be well regarded at Renault.

A near four-decade Nissan veteran, he rose up the ranks to be named head of global purchasing in 2009. In that role he was credited with efforts to bring the two automakers closer together for joint purchasing of more vehicle parts and materials, leveraging combined scale to lower costs.

Facebook sees risks to innovation, freedom of expression ahead of EU rules
Beijing quarantines returning residents as China struggles to pick up economy
Treat us like something between a telco and a newspaper, says Facebook’s Zuckerberg
Macron says Mont Blanc glacier melting proves global warming
Gainey gets probation in solicitation case