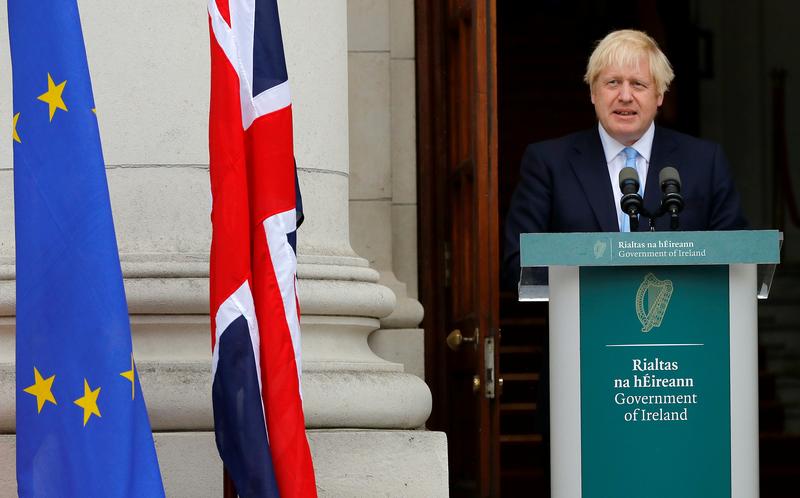 DUBLIN/LONDON (Reuters) – Ireland told British Prime Minister Boris Johnson on Monday that he must make specific proposals on the future of Irish border if there is to be any hope of averting a no-deal Brexit, saying Dublin cannot not rely on simple promises.

The blunt remarks by Irish Prime Minister Leo Varadkar indicate the difficulty of Johnson’s gamble of using the threat of a no-deal exit to convince Germany and France that they must rewrite an exit agreement struck last November.

With Brexit mired in crisis, Johnson was also due on Monday to seek a general election that the British parliament has so far refused to grant him.

Instead, lawmakers want to force Johnson to seek a delay to the Oct. 31 exit date: a bill that aims to rule out a no-deal Brexit is due to become law on Monday.

Johnson promised when he took office in July that he would finally achieve the Brexit that Britain voted for in a 2016 referendum, taking the country out of the bloc by Oct. 31 with or without a withdrawal agreement to smooth the transition.

On arrival in Dublin for talks, Johnson said he did not want a no-deal exit: he said he wanted a deal at the Oct. 17-18 EU summit and had border ideas to present to Dublin but that the United Kingdom would leave the bloc by Oct. 31.

“In the absence of agreed alternative arrangements, no backstop is no deal for us,” Varadkar, standing beside Johnson outside the Irish government, told reporters. “We are open to alternatives, but they must realistic ones, legally binding and workable and we haven’t received such proposals to date.”

“What we cannot do and will not do, and I know you understand this, is agree to the replacement of a legal guarantee with a promise,” Varadkar said, adding there was no such thing as a clean break as talks would stretch on for years.

The 500-kilometre (300-mile) land border between Ireland and the British province of Northern Ireland has always been the biggest stumbling block for an orderly Brexit.

The Withdrawal Agreement that former Prime Minister Theresa May struck in November with the EU includes an “Irish backstop” and says the United Kingdom will remain in a customs union “unless and until” alternative arrangements are found to avoid a hard border.

But the agreement was rejected three times by parliament, as many British lawmakers oppose the prospect of being bound to EU rules and customs duties that would prevent Britain doing its own trade deals and leave it overseen by EU judges.

Varadkar warned that even if a deal was struck, agreeing a future free trade agreement would be a “Herculean” task for Johnson.

Though Ireland is only about an eighth of the size of the United Kingdom’s $2.8 trillion economy, Dublin is backed by the rest of the European Union whose economy – minus the United Kingdom – is worth $15.9 trillion.

With no majority in parliament, which is determined to prevent what many businesses fear would be a calamitous no-deal Brexit, Johnson wants to hold an election to keep his promise of leaving by Oct. 31.

He will put forward a motion in parliament on Monday to propose an election, but it would require the support of two-thirds of lawmakers – and opposition parties have said they will not agree to an election until a no-deal exit is ruled out.

The bill due to become law on Monday, when it receives the assent of Queen Elizabeth, will force Johnson to seek a three-month extension to the Oct. 31 deadline unless parliament has either approved a deal or consented by Oct. 19 to leave without one.

Johnson has said the bill will destroy Britain’s negotiating strategy by removing the threat of a no-deal exit.

“I’m absolutely undaunted by whatever may take place in parliament,” Johnson said in Dublin. “I think what the British people want us to do is to deliver a deal and to get on and take us out on Oct. 31.”

The impasse means there is still deep uncertainty over how the Brexit dilemma will play out and what it will mean for the world’s fifth-largest economy.

In the past week alone, Johnson lost his majority in parliament, expelled 21 rebels from his Conservative Party and saw his own brother quit the government, torn between family loyalty and “the national interest”.

On Saturday, his work and pensions minister suddenly resigned, saying the government was focusing 80 to 90% of its work on no-deal preparations rather than seeking a withdrawal agreement.

Meanwhile two ministers said on Sunday that Johnson would not seek a delay at a summit next month – but notably declined to spell out how he would nevertheless obey the new law if no deal was agreed with the EU.

Foreign minister Dominic Raab said the government would “test to the limit” what the law would require ministers to do, and the Daily Telegraph reported that his office was exploring how it could sabotage any extension request by making it clear to the EU that it did not want a delay.