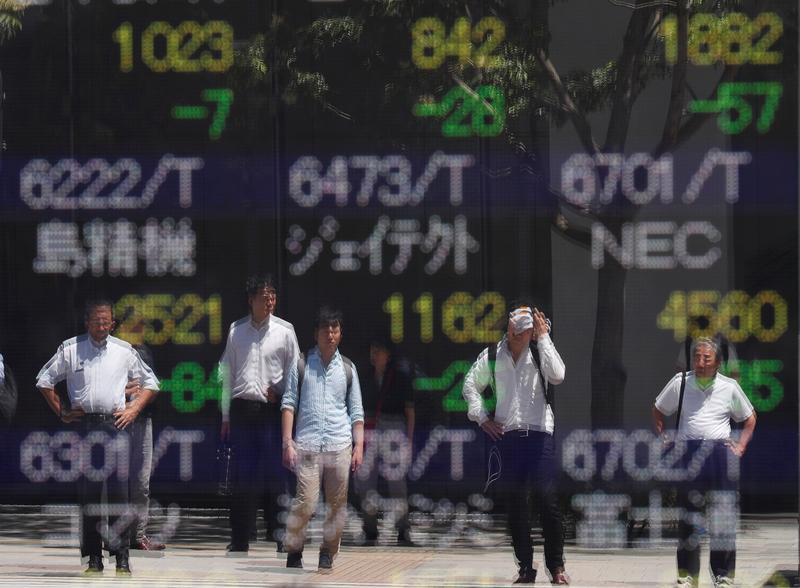 FILE PHOTO: Passersby are reflected on a stock quotation board outside a brokerage in Tokyo, Japan, August 6, 2019. REUTERS/Issei Kato

Safe-haven government bonds fared well in the wake of risk aversion in the broader markets, with the benchmark U.S. Treasury yield touching its lowest level in three years.

The U.S. manufacturing sector contracted in August for the first time since 2016 amid worries about a weakening global economy and rising trade tensions between China and the United States, the Institute for Supply Management’s (ISM) report on Tuesday showed.

MSCI’s broadest index of Asia-Pacific shares outside Japan was a shade lower after losing 0.85% the previous day.

“As the decline in U.S. yields show, the markets will be urging the Fed on to do more even though a September rate cut is already priced in,” Ichikawa said.

According to CME’s FedWatch tool, traders have almost fully priced in a 25 basis point (bp) interest rate cut at the Fed’s Sept. 17-18 policy meeting while expectations for another 25 bp reduction being implemented at the October meeting have risen to 61% from 53% over the past month.

While a decline in U.S. yields usually weighs on the dollar, the greenback was partially underpinned by safe-haven demand generated by worries of a possible chaotic British exit from the European Union – though that possibility later diminished with a setback in parliament late Tuesday for British Prime Minister Boris Johnson. [FRX/]

The dollar index .DXY against a basket of six major currencies stood at 98.939 after rising overnight to 99.37, its highest level since May 2017.

The pound’s strengthening back to about $1.20 came after a cross-party alliance defeated Johnson in an effort to block a “no-deal” Brexit, leading the premier to push for a snap election.

The euro was steady at $1.0973 EUR= after sliding to a 28-month low of $1.0926 overnight as investors braced for a potential interest rate cut by the European Central Bank next week.

U.S. crude oil futures dipped 0.04% to $53.92 per barrel, adding to the previous day’s losses. The contracts had shed more than 2% on Tuesday after the weak U.S. ISM data raised concerns about a weakening global economy.