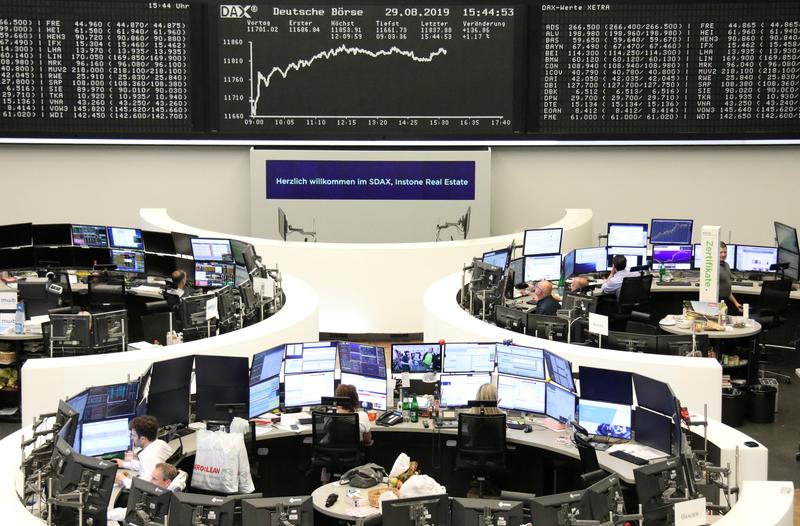 LONDON (Reuters) – Global stocks dipped on Monday after the United States and China imposed new tariffs on each other’s goods, reinforcing investors’ worries over slowing global growth, with no clear end in sight for the trade war.

MSCI’s All-Country World Index .MIWD00000PUS, which tracks shares across 47 countries, was down 0.1% on the day.

European shares rose cautiously, driven by a rally in miners, although sentiment remained fragile in the light of the latest round of tit-for-tat tariffs kicked off between the U.S. and China.

Washington’s 15% tariffs on a variety of Chinese goods came into effect on Sunday, while China began to implement new duties on a $75 billion target list.

However, both sides will still meet for talks later this month, U.S. President Donald Trump said.

Trade-sensitive German shares .GDAXI were flat to slightly higher and the pan-European stocks benchmark index STOXX 600 was up 0.3% by 0754 GMT, beginning September higher after a 1.6% drop in August as the trade war, which has roiled financial markets and raised global recession fears, rages on for more than a year.

“Despite the market’s sanguine take, we believe the ultimate outlook for the trade dispute has become harder to predict with confidence,” said Mark Haefele, chief investment officer at UBS Global Wealth Management.

“Since trade tensions have become the major driving force for stocks, even greater than monetary policy, we advise against adding significantly to equity exposure – particularly for those who have an adequate strategic allocation.”

Euro zone manufacturing activity contracted for a seventh month in August as a continued decline in demand sapped optimism, a survey showed, likely strengthening expectations for monetary easing from the European Central Bank next week.

At their July meeting policymakers at the ECB all but promised to ease policy further as the bloc’s growth outlook worsens.

Italian bond yields fell towards recent multi-year lows after Italy’s prime minister said at the weekend he was confident that he could finalise talks on a new government by Wednesday. [GVD/EUR]

The 5-Star Movement and the Democratic Party (PD) were in intense discussions over the weekend to hammer out a deal on a common agenda and Cabinet posts.

In currency markets, the dollar was flat against a basket of peers. .DXY.

U.S. markets were shut for a holiday on Monday.

Chinese shares, however, bucked the bearish trend, with the CSI300 index .CSI300 rising 1.1% despite the trade row escalation. Providing some tailwind to mainland markets was a pledge by China’s State Council to boost support for the economy.

Washington slapped tariffs on a variety of Chinese goods – including footwear, smart watches and flat-panel televisions – while Beijing imposed new duties on U.S. crude, the latest escalation in a bruising trade war.

Several studies suggest the tariffs will cost U.S. households up to $1,000 a year, with the latest round hitting a significant number of U.S. consumer goods.

Many market players say the market’s reaction was likely exaggerated by algorithm-driven players’ flows in thin trading conditions at start of Asian trade on Monday.

Liquidity could be even more limited than usual because of a U.S. market holiday on Monday.

“(The market move) goes to show you how many data mining algos are involved with equity-linked compared to forex-linked. Was anyone surprised by these tariffs that took effect yesterday?” said Takeo Kamai, head of execution at CLSA in Tokyo.

Tension is also running high in Hong Kong, with police and protesters clashing in some of the most intense violence since unrest erupted more than three months ago over concerns Beijing is undermining democratic freedoms in the territory.

China, eager to quell the unrest before the 70th anniversary of the founding of the People’s Republic of China on Oct. 1, has accused foreign powers, particularly the United States and Britain, of fomenting the unrest.