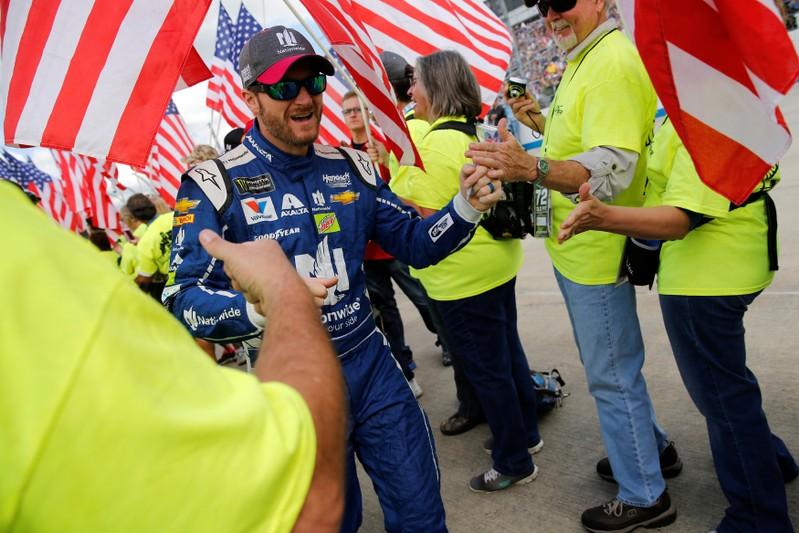 Dale Earnhardt Jr. runs a gauntlet of fans with U.S. flags as he is introduced before the start of the Monster Energy NASCAR Cup Series Apache Warrior 400 race in Dover, Delaware, U.S. October 1, 2017. REUTERS/Jonathan Ernst

Dale Earnhardt Jr. plans to be back on the track on Aug. 31 in the Darlington XFinity race as planned, despite being involved in a plane crash last week.

Earnhardt, 44, said he is still recovering after last Thursday’s accident, in which the small plane the family was riding in bounced upon landing, but with Earnhardt, his wife and daughter avoiding serious injury.

“Yes. I plan on driving still,” Earnhardt said via Twitter. “My lower back is bruised up real bad. Lots of swelling and I just need that to go down and the pain to chill out. I been treating the area every day solely to get well to race. I have a plan B but hope not to use it.”

Earnhardt retired from full-time driving in 2017 and joined NBC Sports as an analyst. He finished fourth at Richmond last year in an Xfinity race.

Earnhardt added that he would likely return to the booth Sept. 1 for the NASCAR Cup Series Bojangles Southern 500.