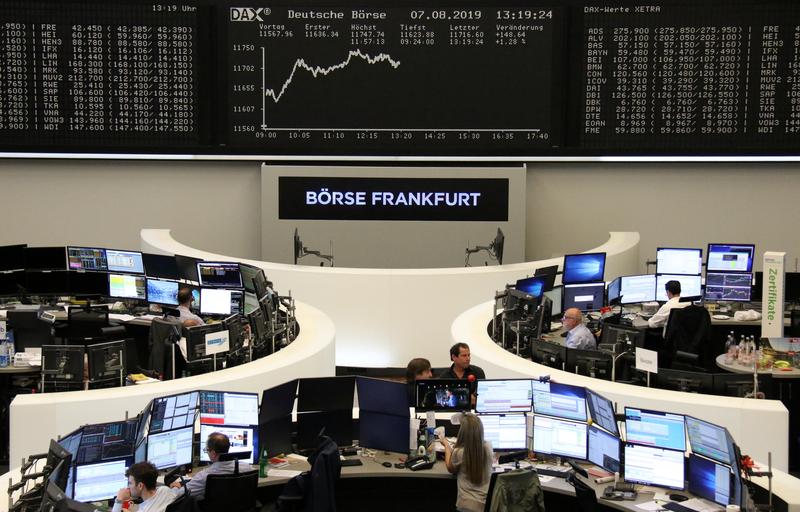 LONDON (Reuters) – Stock markets enjoyed a tentative recovery on Thursday after better-than-expected Chinese export data and a steadying of the yuan restored some calm to global markets.

China moved on Monday to allow the yuan to weaken beyond 7 yuan per dollar, after U.S. President Donald Trump said he would impose more tariffs on Chinese imports. That sent markets into a tailspin.

Investors fear the trade conflict between the world’s two biggest economies will cause a global recession. Bond markets have flashed red and a closely watched U.S. recession indicator reached its highest level since March 2007.

The MSCI world equity index, which tracks shares in 47 countries, rose 0.25%. It remains down more than 3% since the start of August.

“There’s a little bit of calm back in the market at the moment,” said Peter Kinsella, global head of FX strategy at UBP. “But the ball is very much in Trump’s court.”

Wall Street recovered earlier losses on Wednesday and finished the day higher. E-Mini futures for the S&P 500 gained 0.34%, suggesting it would build on that recovery on Thursday.

Investors ran for the safety of bonds this week as fears of a recession grew.

Yields on U.S. 30-year bonds fell as low as 2.123% overnight, not far from a record low of 2.089% set in 2016. Ten-year yields dropped further below three-month rates, an inversion that has reliably predicted recessions in the past.

“Financial markets are raising risks of recession,” said JPMorgan economist Joseph Lupton. “Equities continue to slide and volatility has spiked, but the alarm bell is loudest in rates markets, where the yield curve inverted the most since just before the start of the financial crisis.”

Markets have ramped up their expectations for more easing by the U.S. Federal Reserve, but the question remains how fast Fed policymakers will move.

Futures <0#FF:> moved to price in a 100% probability of a Fed cut in September and a near 24% chance of a half-point cut. Some 75 basis points of easing is implied by January, with rates ultimately reaching 1%.

European and U.S. government bond yields rose on Thursday, with German and French 10-year yields up from record lows after a rally in recent sessions.

Gold also benefited this week as investors scrambled to find somewhere safe to park their cash, rising above $1,500 for the first time since 2013. Spot gold was last at $1,498 per ounce, down from as much as $1,510 on Wednesday. Gold is up 16% since May.

In foreign exchange markets, the Japanese yen rose again, gaining 0.2% to 106.04 yen per dollar. The yen tends to gain at times of uncertainty, and its rise this week underlined investor fears.

China’s yuan also gained. In the offshore market it rose 0.2% to 7.07 yuan per dollar after touching as high as 7.14 yuan on Tuesday.

People sit in front of a board showing market information at a securities brokerage house in Beijing, China August 5, 2019. REUTERS/Thomas Peter

Oil prices regained some ground amid talk that Saudi Arabia was weighing options to halt its decline, offsetting an increase in stockpiles and fears of slowing demand.