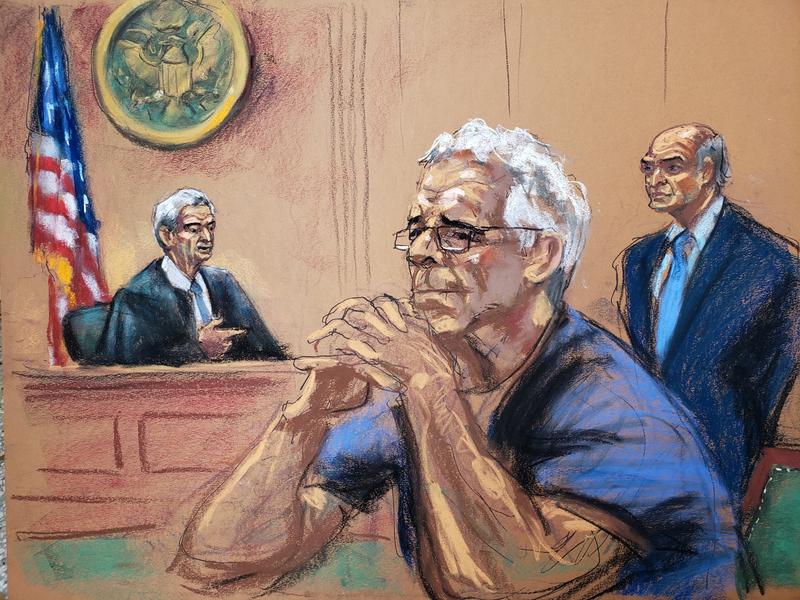 NEW YORK (Reuters) – Financier Jeffrey Epstein could go to trial on charges of sex trafficking involving dozens of underage girls as early as next June, though his lawyers told a court on Wednesday they may need more time.

U.S. financier Jeffrey Epstein looks on near his lawyer Martin Weinberg and Judge Richard Berman during a status hearing in his sex trafficking case, in this court sketch in New York, U.S., July 31, 2019. REUTERS/Jane Rosenberg NO RESALES. NO ARCHIVES.

At a hearing in Manhattan federal court, prosecutors sought a June 2020 trial date, while a lawyer for Epstein asked that it wait another three months.

U.S. District Judge Richard Berman said he would tentatively set aside time for a trial beginning June 8, but revisit the issue later. He said he normally allowed defendants more time to prepare if they wished.

Prosecutors have accused Epstein of arranging for girls under the age of 18 to perform nude “massages” and other sex acts, and of paying some girls to recruit others. Epstein has pleaded not guilty.

Wednesday’s hearing occurred one week after Epstein was reportedly found unconscious and with neck injuries in his jail cell at the Metropolitan Correctional Center in downtown Manhattan.

Epstein, dressed in blue jail scrubs, had no visible injuries on Wednesday. His lawyers declined to comment on the reports after the hearing.

Epstein is appealing Berman’s July 18 denial of his request to remain under house arrest in his $77 million mansion on Manhattan’s Upper East Side while awaiting trial.

The charges against Epstein focus on alleged misconduct from at least 2002 to 2005.

They followed Epstein’s 2008 guilty plea to state prostitution charges in Florida, in exchange for the Justice Department’s agreement not to prosecute him on similar charges.

Epstein served 13 months in jail and agreed to register as a sex offender under the 2008 agreement, which is now widely considered too lenient.

His lawyers have argued this month that the agreement barred federal prosecutors in Manhattan from pursuing the current case over the same conduct. Weinberg said at Wednesday’s hearing that they intended to file motions on the issue.

U.S. Attorney Geoffrey Berman, whose office is overseeing the current case, has said there is no such bar.

U.S. braces for coronavirus spread as outbreaks worsen in Italy, Iran
U.S. EPA has no announcement yet on response to court ruling on refinery waivers
Coronavirus spreads outside China, but ‘world in Wuhan’s debt’ for its actions: WHO
Rising sea levels put Myanmar’s villages on frontline of climate change
No. 3 House Democrat Clyburn of South Carolina to back Biden for president – Politico