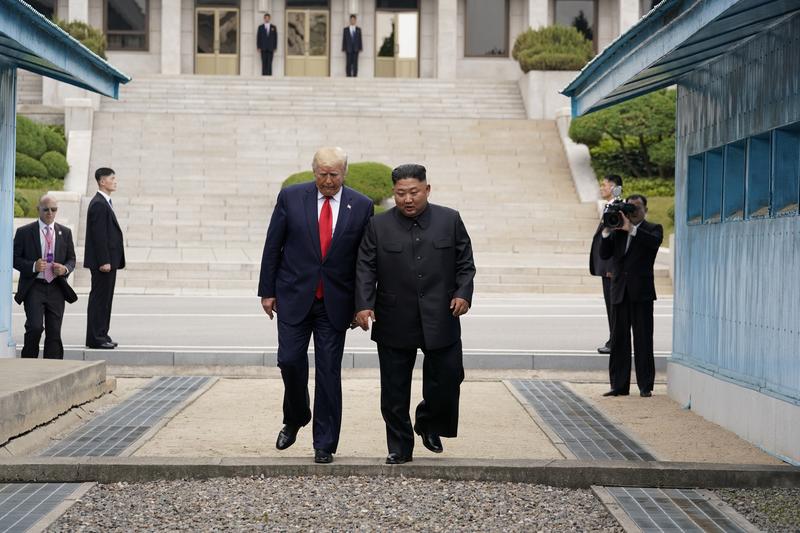 It was the third meeting between the two leaders in just over a year and will raise hopes for a revival of stalled nuclear talks.

Trump briefly crossed a military demarcation line that had for years represented a tense Cold War border, into the North, becoming the first ever U.S. president to set foot in the reclusive country.

Moments later Kim joined Trump to step into the South Korean side.

“It’s a great day for the world,” Trump said as he and Kim stood together amidst a throng of press photographers, aides and bodyguards.

Kim looked relaxed and happy as he chatted with Trump.

“This is an expression of his willingness” to work towards a new future, Kim said.

Kim said it would be a great honor if Trump visited his capital of Pyongyang.

Trump arrived in South Korea late on Saturday for talks with President Moon Jae-in after attending a Group of 20 summit in Osaka, Japan, during which he made a surprise, spur-of-the-moment offer to meet Kim, who accepted it.

Trump and Kim met in the so-called Joint Security Area (JSA), which is patrolled by soldiers from both Koreas. Moon joined the two after their initial handshakes.

Trump and Kim met for the first time in Singapore in June last year, and agreed to improve relations and work towards the denuclearization of the Korean peninsula.

But there has been little progress since then.

A second summit in Hanoi, Vietnam, in February broke down after the two sides failed to narrow differences between a U.S. demand for North Korea to give up its nuclear weapons and a North Korean demand for sanctions relief.

Trump had earlier told Moon that he had “plenty of time” and was in “no rush” to reach a deal.

North Korea has pursued nuclear and missile programs for years in defiance of U.N. Security Council resolutions, and easing tensions with North Korea is one of the U.S. president’s top foreign policy priorities.