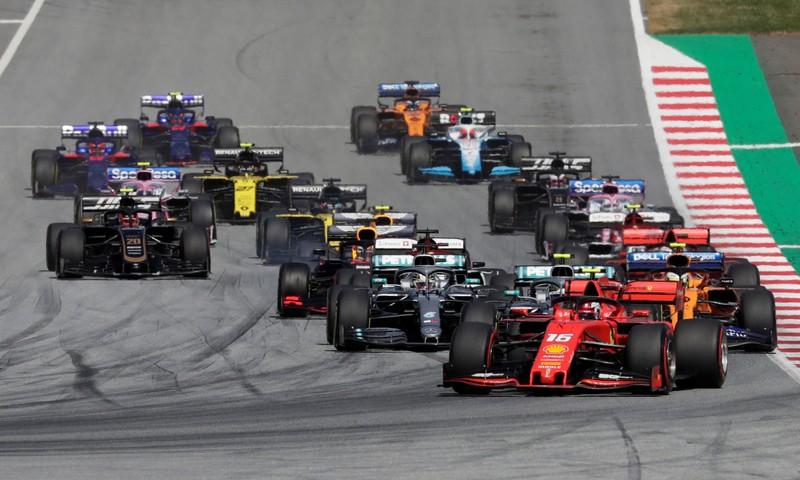 Bottas marked his 50th race for Mercedes with a podium finish. The team’s winning run ended at 10 in a row, eight this season. Hamilton’s lead over Bottas is now 31 points. The Briton damaged his front wing on a kerb and had to change it. Mercedes lead Ferrari by 135 points in the constructors’ standings.

Leclerc led from pole, his second of the season, but lost out to Max Verstappen two laps from the end. Ferrari have still not won this season despite three poles. Vettel had a slow first stop because a radio problem meant the mechanics were not expecting him. The German drops to fourth overall from third.

Verstappen’s sixth career win and first since Mexico last October, which was also the last time Mercedes were beaten. The victory was a first for engine maker Honda since Hungary 2006. Verstappen started on the front row, dropped to eighth after the anti-stall kicked in and then fought back. He gained a point for the fastest lap. Gasly was lapped by his team mate.

A double points finish for McLaren sent them 20 points clear of Renault, who also provide their engines. Norris started fifth and equalled his best finish. Sainz started 19th due to a power unit penalty and did a long stint on the medium tyre. He damaged his front wing just as he was about to attack Gasly and felt seventh was within reach.

Ricciardo said he lacked pace and felt the team had gone back to square one after changing a lot on the car. Hulkenberg started 15th after a five-place grid drop for an engine change.

Giovinazzi opened his scoring in Formula One as the team celebrated their frst double points finish of the season. Alfa moved up to sixth overall.

Racing Point slipped a place with their second successive blank. Stroll reported an issue with the fuel flow meter, forcing the team to turn down the mode.

Kvyat said he was a ‘sitting duck’ in the race with rear brake duct damage and a lack of pace.

Magnussen qualified fifth but dropped five places for a gearbox change. He then collected a drive-through penalty for moving on the grid before the start. The Dane also picked up two penalty points. Both drivers struggled with a lack of grip.

The Williams drivers are now the only ones yet to score a point this season. Russell started from the pitlane after a front wing change, but still raced the Haas and Toro Rosso drivers.