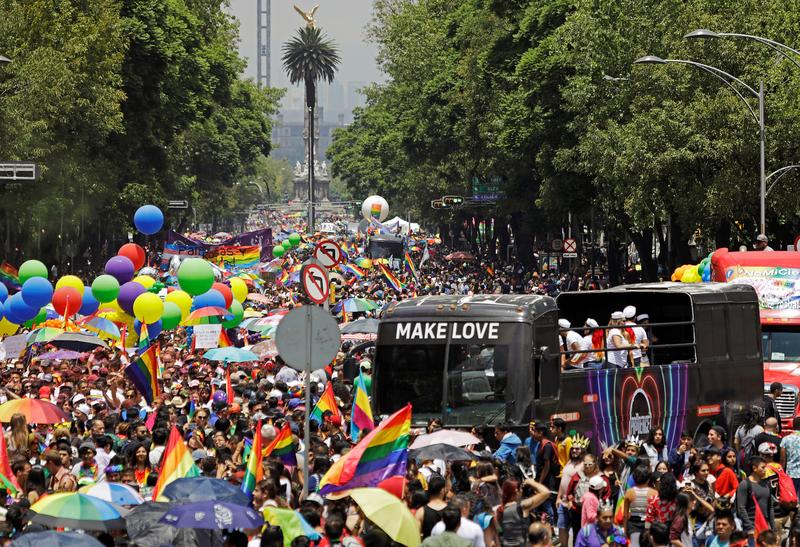 MEXICO CITY (Reuters) – Tens of thousands of people paraded through the streets of Mexico City on Saturday to celebrate the capital’s growing role as a beacon of tolerance for migrants fleeing persecution for their gender and sexuality in Latin America.

Clowns on stilts and drag queens in stilettos towered over the crowd filling the city’s Reforma boulevard for the 41st annual pride parade, while revelers pushed past policemen to join the throng of bright flags and gaudy outfits.

The first Latin American capital to legalize gay marriage a decade ago, Mexico City has become a bastion of progressive causes in a country whose border cities have been under increasing scrutiny for their treatment of vulnerable migrants.

“Here, I feel free compared to my own country, which is very repressive,” said Daniela Morillo, 25, a lesbian in rainbow garb who left Venezuela to marry her partner.

Above her, a panoply of balloons hovered over the crowd, as peddlers offered cold drinks and rainbow face paint, applying all six colors in one thick brush stroke.

Mexican immigration authorities do not register sexual orientation, but activists say the number of LGBTQ migrants in the capital has risen as people flee discrimination elsewhere.

The LGBTQ exiles have been part of a surge in mostly U.S.-bound migrants that has pushed into the country from Central America and fueled tension between Mexico and U.S. President Donald Trump, who wants the exodus halted.

The road through Mexico is perilous, and LGBTQ people, especially transgender women, are even more exposed. Some have been attacked in border cities like Tijuana. [nL8N1XP3GD]

Nashieli Ramirez, head of Mexico City’s human rights commission, said the capital has received a number of migrants returning from towns on the U.S. frontier, including a group of transgender women who retreated from Tijuana last December.

“They decided to come back because in the border city, they were being doubly discriminated against,” she told Reuters.

Still, officials say the capital has its own problems.

Mark Manly, the Mexico representative for the U.N. High Commissioner for Refugees (UNHCR), said even Mexico City needed to do more to curb discrimination as the UNHCR made its first-ever appearance at the parade this year.

Henry Javier Umana, a migrant from Honduras, never had dreams of going all the way north. Once an activist in his local LGBTQ community, Umana began thinking about fleeing his homeland for Mexico when his ex-partner was murdered there.

“I heard that Mexico City was very big, and very open,” said Umana, a shaggy-haired 34-year-old who wore a “love has no borders” shirt as he walked in the section for migrants and asylum-seekers – another first for the Mexico City parade.

“We’re really worried,” Jimenez said, “since this has made migrants’ paths more difficult.”