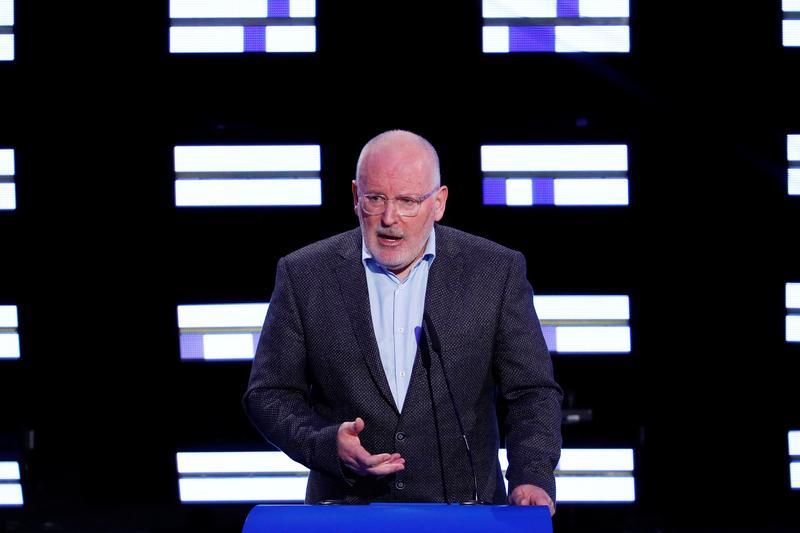 BRUSSELS (Reuters) – Dutch socialist politician Frans Timmermans is on course to be named as the EU’s next chief executive, diplomats and officials said on Sunday, hours before European Union leaders meet to decide who wins the bloc’s top posts in Europe.

FILE PHOTO: European Commission vice-president Frans Timmermans, candidate of the Party of European Socialists (PES), speaks at the Plenary Hall during the election night for European elections at the European Parliament in Brussels, Belgium, May 27, 2019. REUTERS/Francois Lenoir/File Photo

Barring unexpectedly tough resistance from eastern European countries, Timmermans is set to be chosen after talks between France and Germany at the G20, two diplomats and one European Parliament adviser said.

If confirmed, the choice would mark a victory for centrists and liberals, who challenged what they saw as an increasingly German-dominated EU at the top ranks in Brussels.

“It looks to be Timmermans for the European Commission president,” one diplomat involved in the talks told Reuters, a view echoed by a second envoy when asked about the process of selection for five top posts for a new five-year mandate.

Up for grabs are the presidencies of the EU’s executive Commission, the parliament, the European Council of EU governments, the EU’s foreign policy chief and the head of the European Central Bank, which governs the euro currency.

Timmermans, who is currently a senior European Commission official and was a Dutch foreign minister, is expected to be confirmed as the choice to replace Jean-Claude Juncker at a summit dinner of 28 leaders in Brussels starting at 1600 GMT.

German parliamentary adviser Tobias Teuscher told Reuters that European Council President Donald Tusk has proposed giving the post to the Socialist and Democrats political bloc, of which Timmermans was the lead candidate in May European Parliament elections.

But Timmermans is unpalatable to eastern EU states such as Hungary and Poland for his role in the bloc’s rule of law probes against their nationalist governments.

With France and Germany long at odds over not just the candidates but the rules of the job search itself, a Tuesday deadline to choose the head of the European Parliament has given urgency to a task that could otherwise drag on for months, diplomats say.

Facing accusations of being out of touch with citizens, European lawmakers have sought to line up the best performers in May’s European Parliament elections for most of the top jobs.

Under that plan, German center-right EU lawmaker Manfred Weber wanted to take the European Commission presidency, as the European People’s Party is the biggest political alliance.

But France’s President Emmanuel Macron has rejected the ‘Spitzenkandidat’ system supported by German Chancellor Angela Merkel, who for her part has refused to give it up.

Spanish Prime Minister Pedro Sanchez suggested starting from scratch after an inconclusive second attempt at a summit earlier in June. Many governments want a balance of men and women and to avoid the top jobs going to members of western EU governments.

The emerging compromise is to allow Weber to become European Parliament president and give the Commission job to Timmermans, who France and Spain strongly support.

“Both Spitzenkandidaten are part of the solution — that is very important. As things look now, it won’t come to an institutional conflict,” Merkel told reporters after the G20 summit in Osaka, Japan, where EU leaders held talks on the jobs.

For investors and financial markets, the most crucial choice is president of the ECB, which sets interest rates for the euro zone. France could be given the post, one EU diplomat said, naming Francois Villeroy de Galhau, who is governor of the French central bank. Erkki Liikanen, a former Finnish central bank chief, is also a candidate to succeed Mario Draghi.

However, the role was not discussed by Tusk in talks with factions of the European Parliament on Sunday and one diplomat said Merkel had asked for the post to be decided later.