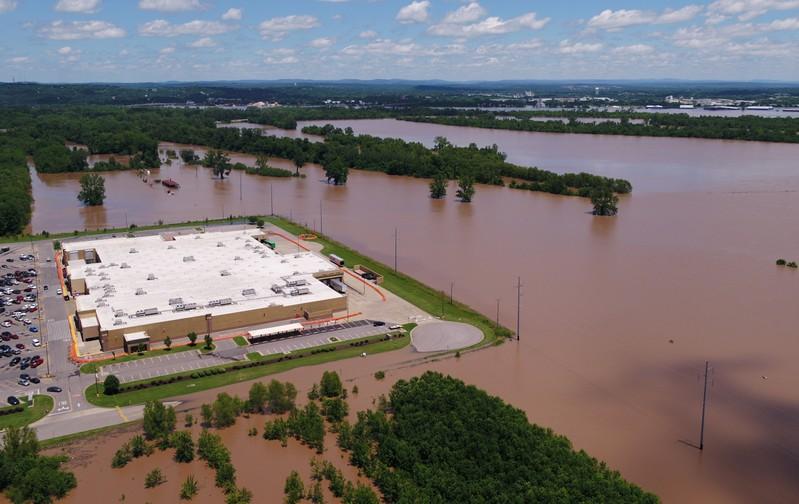 (Reuters) – The skies cleared over the storm-battered Central United States on Friday, but flooding fears continued as rain-swollen rivers breached a levee in Arkansas and overflowed other barriers, forecasters said.

FILE PHOTO: A building sits submerged in the flood waters of the Arkansas River in this aerial photo in Fort Smith, Arkansas, U.S., May 30, 2019. REUTERS/ Drone Base

Relentless rain and deadly tornadoes have been blamed for least 16 deaths across several states in the nation’s midsection, turning highways into lakes and nearly submerging homes in Arkansas, Louisiana, Illinois and Oklahoma.

Sunny skies over the weekend are expected to give way to more storms in eastern Oklahoma from Sunday through Wednesday, said meteorologist Dennis Cavanaugh of the National Weather Service office in Little Rock, Arkansas.

“The dry weather is not going to last long enough to let a lot of water drain out of the rivers, and that’s going to continue to put stress on the levee system,” Cavanaugh said.

Major waterways severely bloated by torrential downpours spilled over levees and flooded mostly agricultural land throughout Missouri, Arkansas and other parts of the Midwest.

The Arkansas River broke through a levee in Dardanelle, Arkansas. In Missouri, a levee along Durgens Creek off the Mississippi River was deemed susceptible to a breach and was being monitored, said meteorologist Jayson Gosselin of the National Weather Service office in St. Louis.

At the same time, brimming rivers were expected to continue to crest as they flow downstream, overflowing more levees along the way.

“There are all kinds of overtoppings already,” Gosselin said, noting the Missouri and Mississippi rivers spilled over more than a dozen levees in eastern and central Missouri.

“Unfortunately, there’s going to be more,” he said. “It’s the crest working its way downstream.”

While overflows mean flooding, a breach, which is declared when a levee breaks, is far more threatening.

“If it’s overtopping, water is moving into that area much slower,” Gosselin said, noting that once the water recedes, that levee would still be intact to resume its role protecting land.