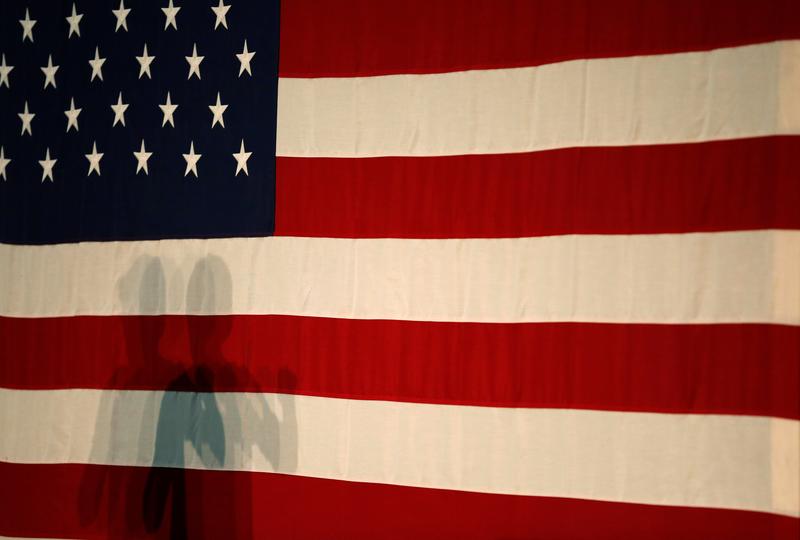 (Reuters) – The first nominating contest for the 2020 U.S. presidential election is more than eight months away, but the race for the White House is already in full swing.

The shadow of Democratic 2020 U.S. presidential candidate and U.S. Senator Elizabeth Warren (D-MA) is projected onto an American flag during a townhall event in Columbus, Ohio, U.S., May 10, 2019. REUTERS/Maddie McGarvey

Two dozen Democrats are vying to take on Republican U.S. President Donald Trump, and one Republican is challenging him, too.

Here is a list of key dates, starting with the first Democratic debate in June.

June 26-27: First Democratic debate in Miami. The debate will take place over two nights, with no more than 10 candidates on the stage each evening. Candidates must qualify by reaching either a polling or a fundraising threshold, set by the Democratic National Committee.

July 30-31: Second Democratic debate in Detroit. Round 2 will also take place over successive nights, with candidates split between them.

Sept. 12-13: Third Democratic debate, location to be determined. The DNC raised the qualifying thresholds for the third and fourth debates; if more than 10 candidates qualify, the debate will again be split into two nights.

Feb. 3: Iowa caucuses (Democratic and Republican). Unlike a primary election, which is similar to a general election, Iowans gather at local precincts around the state to cast their votes. Republicans use secret or paper ballots, while Democrats sit or stand together in groups to show their support for candidates.

Feb. 11: New Hampshire primary (Democratic and Republican). The results of the nation’s first primary often have an outsized effect on the contest.

Feb. 22: Nevada caucuses (Democratic). The outcome in the western state, which employs a caucus rather than a primary, could turn on Nevada’s sizable Latino population.

Feb. 29: South Carolina primary (Democratic). The southern state is a crucial early test for Democratic candidates’ strength among black voters, who make up the majority of the primary electorate.

March 3: California, Texas and at least 11 other states hold primaries. The so-called “Super Tuesday” looks like a make-or-break day, with an enormous haul of delegates available for the taking.

July 13-16: Democratic National Convention in Milwaukee. Wisconsin’s swing to Trump in 2016 was key to his victory.

Aug. 24-27: Republican National Convention in Charlotte. Like Wisconsin, North Carolina was another state that narrowly supported Trump in 2016 after having voted Democratic in the previous two presidential races.