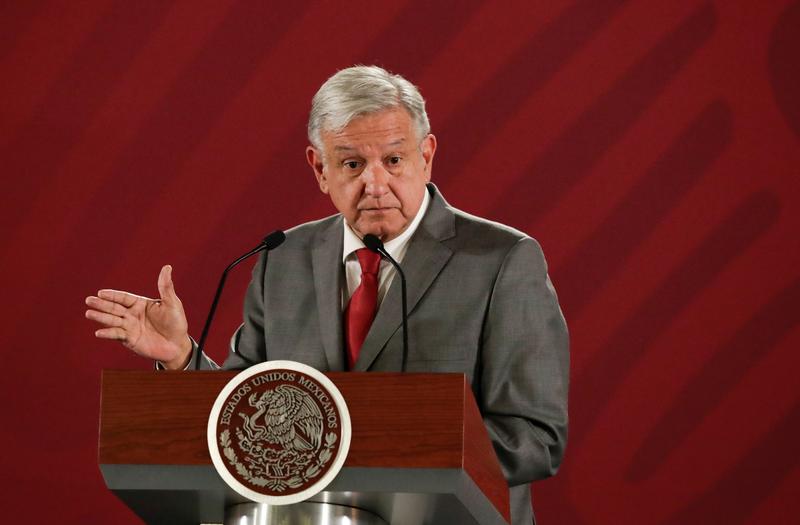 MEXICO CITY (Reuters) – Mexico’s president and the top U.S. business lobbying group called on President Donald Trump to back down from a threat to impose punitive tariffs on Mexican imports, in a dispute over migration that could shock Mexico’s economy.

Trump said he will introduce the tariffs on June 10 if Mexico does not halt the flow of illegal immigration, largely from Central America, across the U.S.-Mexican border, battering Mexican financial assets and denting global stocks.

The ultimatum from Trump is the biggest foreign policy test to date for Mexican President Andres Manuel Lopez Obrador and a tall order for Mexican security forces struggling not only to combat migrant flows but also to fight a record level of gang violence and homicide.

Mexico’s economy, which is heavily reliant on exports to the United States, shrank in the first quarter and would reel under U.S. tariffs which could reach as high as 25% under Trump’s plan.

In his six months in office, veteran leftist Lopez Obrador has consistently sought to deflect the U.S. president’s barbs and avoid embroiling himself in a confrontation.

He predicted that Trump, who is also engaged in a worsening trade war with China, would rectify his demand.

“I tell all Mexicans to have faith, we will overcome this attitude of the U.S. government, they will make rectifications because the Mexican people don’t deserve to be treated in the way being attempted,” Lopez Obrador told reporters.

In April, Trump took a step back from an earlier threat to close the southern border to fight illegal immigration, under pressure from companies worried that a shutdown would cause chaos to business.

The influential U.S. Chamber of Commerce business group is looking at ways to challenge Trump’s tariff move against Mexico, including legal options.

“We have no choice but to pursue every option available to push back,” Neil Bradley, the group’s executive vice president and chief policy officer, told reporters.

Other industry groups also criticized Trump’s threat, saying it would cost American businesses, farmers and consumers who have already been bearing the brunt of the separate, lingering U.S. trade dispute with China.

“These proposed tariffs would have devastating consequences on manufacturers in America and on American consumers,” Jay Timmons, president of the National Association of Manufacturers, said in a statement.

Trump, who has embraced protectionism as part of an “America First” agenda aimed at reshaping global trade, ignited fears in Mexico and on global financial markets on Thursday when he announced he would ratchet up tariffs on Mexico “until the Illegal Immigration problem is remedied.”

The plan would impose a 5% tariff on Mexican imports starting on June 10 and increase monthly, up to 25% on Oct. 1.

Such levies would deliver a heavy blow to Mexico’s economy, which is underpinned by exports to the United States of goods from avocados and tequila to televisions and cars made by companies such as Ford Motor Co and Nissan.

Mexico sends around 80 percent of its exports to the United States and is one of America’s top trading partners in goods.

Mexico’s main stock index was down 1.3% on Friday after opening the session sharply lower, and the peso currency was down more than 2.5% against the dollar.

Foreign Minister Marcelo Ebrard, who was due to travel to Washington on Friday, on Twitter called Trump’s treatment of Mexico “unfair” and said the tariffs made “no economic sense for anyone.”

But Trump sought to turn up the pressure again on Friday.

“Mexico makes a FORTUNE from the U.S., have for decades, they can easily fix this problem. Time for them to finally do what must be done!” Trump wrote on Twitter.

Trump vowed frequently during his 2016 election campaign to make Mexico pay for construction of a wall on the U.S.-Mexican border to curb illegal immigration but successive Mexican governments have firmly rejected that idea.

The U.S. Congress also refused a request from Trump for $5.7 billion to help build the wall, prompting him to declare a national emergency and try to divert funds from other areas of the U.S. government. The issue is now in the courts.

Trump and his fellow Republicans say something needs to be done to stem the biggest migrant surge on the southern border in a decade.

U.S. officials say 80,000 people are being held in custody, with an average of 4,500 mostly Central American migrants arriving daily, overwhelming the ability of Border Patrol officials to handle them.

A senior White House official said Trump was particularly concerned that U.S. border agents apprehended a group of 1,036 migrants illegally crossing the border from Mexico on Wednesday. Officials said it was the largest single group since October. Before unveiling the tariff threat, Trump posted a video purporting to be of the crossing on his Twitter feed.

Since taking office in December, Mexico’s Lopez Obrador has urged Trump to help him tackle migration by promoting economic development in Guatemala, Honduras and El Salvador, where most of the migrants apprehended on the U.S. border come from.

Pledging to exercise “great prudence” in seeking a resolution to the tariff dispute, the Mexican president said he did not want to involve the World Trade Organization for now.

Though Lopez Obrador again stressed the need for diplomacy on Friday, he has in the past offered pointed criticism of Trump over migration policy. He was adamant that he had the support of Mexicans living in Mexico and the United States.

Lopez Obrador, who won election last year in a landslide, in 2017 likened Trump’s attitude towards migrants to Nazi Germany’s persecution of Jews.

In a letter responding to Trump’s announcement on Thursday, Lopez Obrador called Trump’s America First policy “a fallacy” and accused him of turning the United States into a “ghetto” that stigmatized and mistreated migrants.