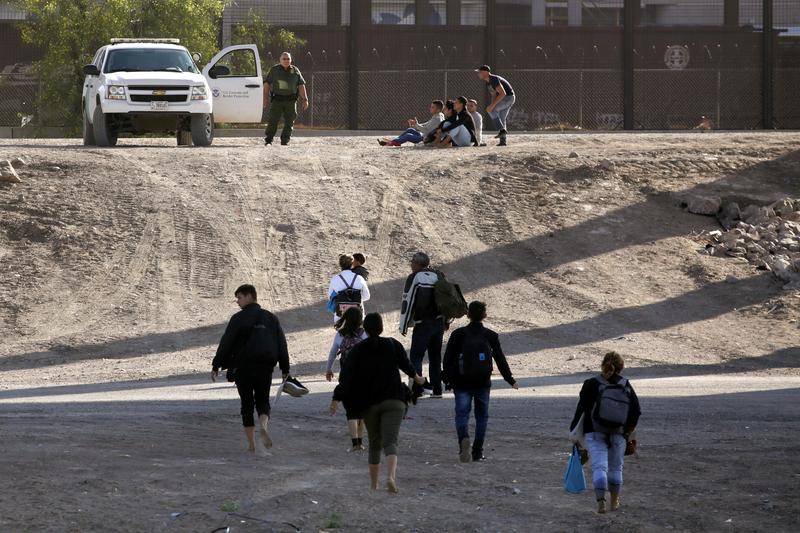 (Reuters) – The internal watchdog for the U.S. Department of Homeland Security (DHS) has urged officials to take immediate steps to alleviate “dangerous overcrowding” after it found some adult detainees being held in “standing-room-only conditions” for days or weeks at a border patrol facility in Texas.

FILE PHOTO: Migrants are seen after crossing illegally to the United States to turn themselves in to request asylum in El Paso, Texas, U.S., as seen from Ciudad Juarez, Mexico May 31, 2019. REUTERS/Jose Luis Gonzalez/File Photo

U.S. officials say they have been overwhelmed by tens of thousands of mostly Central Americans crossing into the United States and turning themselves over to border agents. President Donald Trump has threatened Mexico with tariffs to do more to stop the flow.

The El Paso Del Norte Border Patrol processing facility in southern Texas, which has a maximum capacity of 125 detainees, was holding 900 people on site on May 8, the watchdog found in a report dated May 30.

The report included eyewitness accounts of families left outside in a parking lot. Staff members told the watchdog that as of May 11 they were no longer holding families in the parking lot.

Single adults were held in cells designed for one-fifth as many detainees as were housed there and were wearing soiled clothing for days or weeks with limited access to showers, the report said. Pictures published with the report show women packed tightly together in a holding cell.

“We also observed detainees standing on toilets in the cells to make room and gain breathing space, thus limiting access to toilets,” the watchdog wrote.

Reuters photos taken earlier in May showed similar conditions at another border patrol facility in McAllen, Texas, with adults and children sleeping on the ground outside and rigging makeshift shelters out of reflective blankets.

In their official response to the report, DHS – which oversees Border Patrol and CBP – said the current situation on the U.S.-Mexico border “represents an acute and worsening crisis” because of the sheer numbers of arriving migrants, many seeking to claim asylum in the United States.

Apprehensions of migrants on the southwest border hit another record high last month with 98,977 people arrested. On Wednesday, U.S. border agents apprehended a group of 1,036 migrants as they illegally crossed the border from Mexico, the largest group arrested in this fiscal year, which began in October.

At the beginning of May, CBP put up a tent in El Paso with the capacity to hold 500 people and plans to open another facility capable of detaining 800 more people by July 2019, DHS said in its response. In 18 months, a permanent Centralized Processing Center (CPC) in El Paso is expected to be completed with the capacity to hold around 1,800 migrants.

The current border system was originally designed to process large numbers of single adult men – mainly from Mexico – not families with young children coming from farther away.

Because of lack of detention capacity, most family units are being immediately released while many adults traveling alone are sent to detention when there is space.

Border Patrol managers said they call U.S. Immigration and Customs Enforcement (ICE) daily to request detention space for single adults but ICE officials often say they cannot take detainees, the report said. ICE did not immediately respond to a request for comment on the report.

The space problems have been exacerbated when detainees with infectious diseases, like chicken pox, scabies, and influenza, need to be separated from the general population, according to the report. Disease outbreaks have also been a concern when adult migrants are transferred to ICE detention.