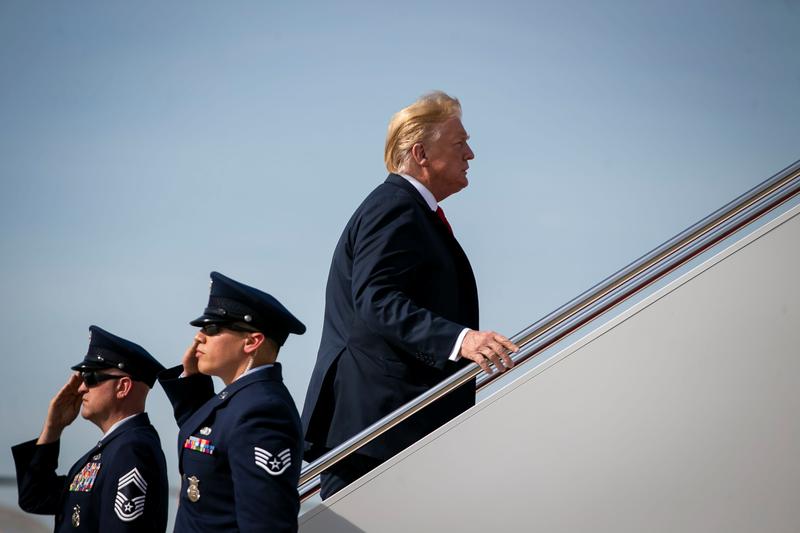 WASHINGTON (Reuters) – U.S. President Donald Trump sued on Monday to block a subpoena issued by the Democratic chairman of the U.S. House Oversight Committee that sought information about his personal and business finances.

U.S. President Donald Trump boards Air Force One as they travel to Florida for Easter weekend, at Joint Base Andrews in Maryland, U.S., April 18, 2019. REUTERS/Al Drago

The suit, the first salvo in what promises to be an escalating legal battle over efforts to investigate Trump by the Democratic-controlled U.S. Congress, alleged Democrats have launched “all-out political war” on Trump and subpoenas “are their weapon of choice.”

The committee’s subpoena had sought eight years of documents from Mazars USA, an accounting firm long used by Trump to prepare financial statements, related to its investigation of allegations Trump inflated or deflated financial statements for potentially improper purposes.

Elijah Cummings, the House Oversight Committee chairman, issued the subpoena to the president’s accountant after Trump’s former lawyer, Michael Cohen, testified to Congress in February that Trump had misrepresented his net worth.

“Chairman Cummings’ subpoena is invalid and unenforceable because it has no legitimate legislative purpose,” Trump’s lawyers said in a filing, arguing it exceeded constitutional limits on the power of Congress to investigate.

“Its goal is to expose Plaintiffs’ private financial information for the sake of exposure, with the hope that it will turn up something that Democrats can use as a political tool against the President now and in the 2020 election,” they said.

In a statement on Monday, Cummings said there was no valid legal basis to try to block the subpoena and accused the White House of “unprecedented stonewalling” in refusing to produce a single document or witness to the committee.

“This complaint reads more like political talking points than a reasoned legal brief, and it contains a litany of inaccurate information,” Cummings said.

The filing was the first effort by Trump’s legal team to quash multiple investigations of Trump and his finances by Democratic-led committees in Congress. His lawyers made it clear they would resist those efforts.

“Democrats are using their new control of congressional committees to investigate every aspect of President Trump’s personal finances, businesses, and even his family,” Trump’s lawyers said.

“Instead of working with the President to pass bipartisan legislation that would actually benefit Americans, Democrats are singularly obsessed with finding something they can use to damage the President politically,” they said.

Republicans on the Oversight Committee also had objected to the subpoena from Cummings, arguing it was an abuse of congressional authority to target the private financial information of Trump.

Ross Garber, a Washington lawyer who focuses on political investigations, said the lawsuit might be dismissed because of the Speech or Debate Clause of the U.S. Constitution, which offers broad legal protection to members of Congress for actions they undertake as legislators.

But Garber also said there was some merit to Trump’s argument that the subpoena was brought for the improper purpose of unearthing politically damaging information about him, rather than for a legitimate legislative purpose.

“Congressional authority is vast but it is not unlimited, and the complaint raises potentially legitimate questions,” Garber said, adding that Congress would have a stronger basis for the request if it had initiated impeachment hearings, when courts have said its investigative powers are heightened.

Garber said disputes between the White House and Congress over documents are often resolved through negotiation, rather than lawsuits, and that a compromise was still possible.

The filing said Democrats have issued more than 100 subpoenas and requests “to anyone with even the most tangential connection to the President.”