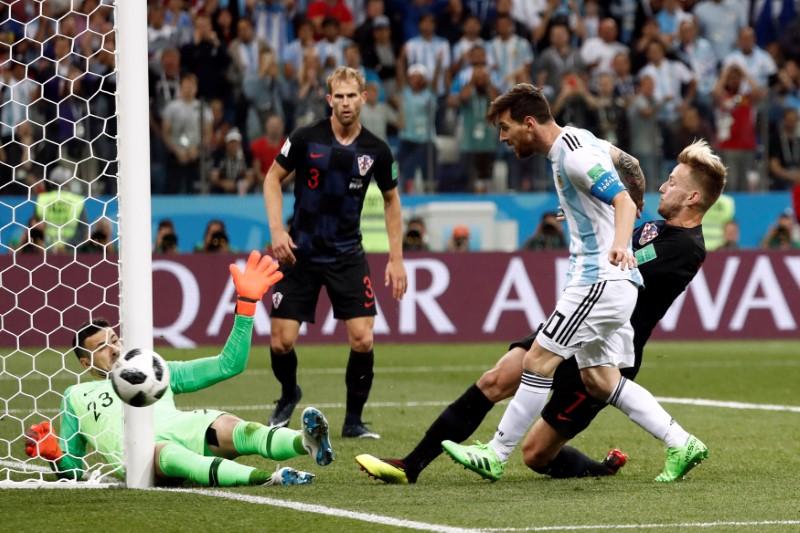 NIZHNY NOVGOROD, Russia (Reuters) – As an excited Diego Maradona twirled his shirt from the stands and thousands of Argentina fans bayed before kickoff against Croatia, Lionel Messi was seen rubbing his forehead in stress.

He managed just 20 touches in the first half, the fewest of any Argentina player, and trudged off uncomfortably.

Yet worse was to follow in Thursday’s second half of horror at Nizhny Novgorod as Croatia destroyed Messi’s team with three goals for Argentina’s worst group stage defeat in 60 years.

About to turn 31 at the weekend, the Barcelona genius left the pitch looking lonely and broken after a game that may have ended his chances of ever winning a World Cup.

Maradona, the 1986 World Cup winner whom Argentines constantly compare him to, went from waving a No. 10 Messi shirt to wiping tears out of his eyes, slumped in his seat.

On social media, and among fans, the big debates over Messi – Is he as great as Maradona? Is he better than Portugal’s Cristiano Ronaldo? – flared up fast and savagely.

“I’m ashamed of this shirt. Right now, I want to burn it. Where was Messi? Where were Argentina?” said Renzo Alvarez, 47, shouting angrily among a group of angry fans, all wearing Messi shirts and some sporting masks of his face.

“We have come all this way, spent thousands of dollars we can ill afford, cheered them to the rafters, and they show no heart, no balls, for the nation. I simply can’t believe it.”

Messi memes quickly sprung up on the internet.

Playing at his fourth World Cup, with the heartbreak of a 1-0 defeat against Germany in the 2014 final still raw, Messi and Argentina now face the shocking prospect of going out in the first stage unless remaining Group D results go their way.

He has already resigned from international football once – after missing a penalty during a shootout against Chile in the 2016 Copa America final – but was persuaded back by pleas from fans, family, teammates and Maradona.

But given he will turn 35 at the next World Cup, and is clearly creaking under the weight of expectation, most expect Messi to quit the international stage some time after Russia.

On Thursday night, he was upstaged by Luka Modric, Croatia’s man-of-the-match playmaker and 32-year-old captain who played with joie de vivre and scored a stunning goal.

By contrast, Messi barely figured, marked out of the game by an ultra-disciplined Croatia, unable to get a shot on goal, and only managing to thread telling passes on two or three occasions. As against Iceland in Argentina’s opening draw, when he missed a penalty, Messi trudged off silent and thunder-faced.

“Leo is our heart and soul, but we couldn’t find him with the ball,” said manager Jorge Sampaoli, urging fans to turn their ire on him and not on Messi.

Though it was Modric who showed him up on Thursday, the comparison that most hurts Messi is with his great La Liga rival Ronaldo. The Portuguese great has already won a major international trophy at the 2016 Euros and has begun his latest World Cup campaign at a canter with four goals in two games.

Unless something extraordinary happens, Messi may soon be watching Ronaldo from outside Russia.