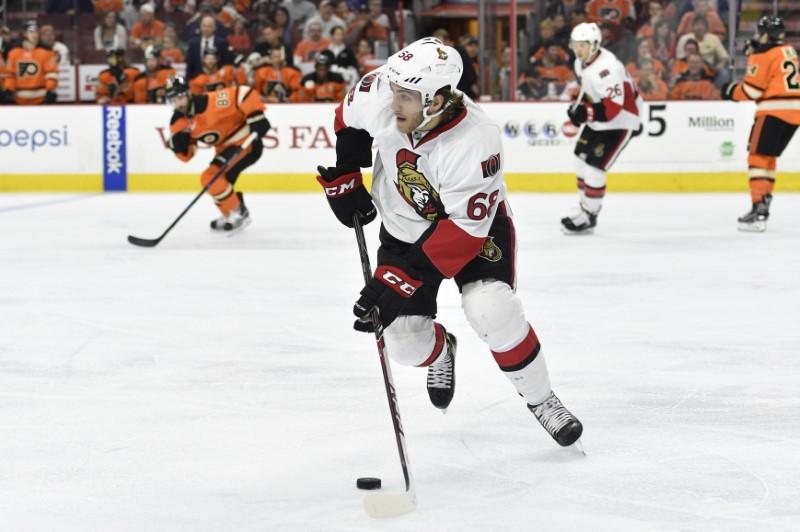 Left winger Mike Hoffman was traded to the San Jose Sharks on the heels of allegations his fiancee harassed captain Erik Karlsson’s wife.

Hoffman was shipped out on Tuesday along along with ECHL defenseman Cody Donaghey and Ottawa’s fifth-round choice in the 2020 draft. The Sharks in return gave up a sixth-round pick in 2020, defenseman Julius Bergman and forward Mikkel Boedker.

“Today’s trade showcases our determination to strengthen the future of the team by improving chemistry, leadership and character in the locker room and on the ice. We are confident it is a step in the right direction for the long-term success of this organization,” Senators general manager Pierre Dorion said in a statement.

On the basis of online harassment, Melinda Karlsson filed an order of protection against Monika Caryk, Hoffman’s fiancee, on May 4.

In the claim, Karlsson alleged harassment included remarks about the death of their child, who was stillborn in March, via comments on Melinda Karlsson’s Instagram account under a pseudonym.

“Monika Caryk has uttered numerous statements wishing my unborn child dead … uttered that she wished I was dead and that someone should ‘take out’ my husband’s legs to end his career,” the document said, according to media reports.

Hoffman told the Ottawa Citizen the claim is untrue.

“It’s 150 percent that it’s not us,” Hoffman told the Ottawa Citizen. “We have nothing to hide.”